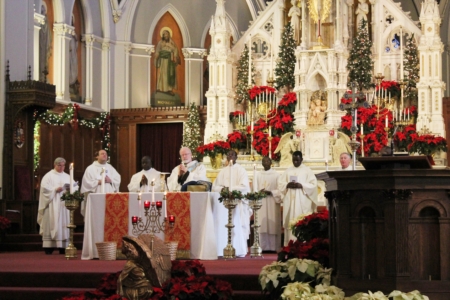 SOUTH BOSTON -- Cardinal Seán P. O'Malley celebrated Mass at the nearly-filled Cathedral of the Holy Cross on Jan. 1 for the Haitian communities of Boston in honor of Haitian Independence Day.

After his arrival in Boston, Cardinal O'Malley started the tradition of celebrating the Mass for the Haitian community in the Archdiocese of Boston on Jan. 1 the feast day of Our Lady, Mother of God.

"People within the Haitian community are very appreciative to the fact that when Cardinal Seán came to Boston, he initiated this Mass for the Haitian Community. I think it is one of the ways that the Haitian Community feels that the cardinal cares for them, that they are a part of the Archdiocese of Boston," Lorna DesRoses, director of the Office of Black Catholics said.

"She being the first Christian, for us, she is our mother she is our example and we go to her to seek intercession for anything that happens within our lives and also things that are happening within Haiti," DesRoses said.

At the Mass, the offertory procession included fruits and the national flag of Haiti, along with the Eucharist.

Following Haitian tradition, the Mass included the Te Deum, a prayer from the breviary of praise and thanksgiving to God traditionally chanted in Catholic countries to welcome the New Year.

"The Te Deum is actually traditionally sung on New Year's Day at Mass in Haiti," she said.

The Mass concluded with the singing of the Haitian national anthem.

Haitian independence came in 1804 after a 13-year war against France, making Haiti the first black republic in the world. General Touissant L'Overture led the rebellion until his capture in 1802, and Jean Jacques Dessalines continued to lead the rebellion until and after the defeat of the forces of Napoleon Bonaparte at the Battle of Vertieres in 1803.