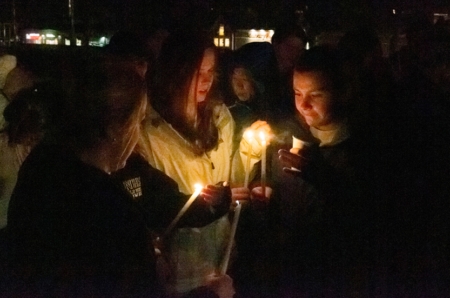 NEEDHAM -- When Jackie Arrondo, 16, first heard about the shootings at Sandy Hook Elementary School in Newtown, Conn., the recently confirmed high school junior set about organizing a prayer and memorial event, one of several held in the archdiocese.

Arrondo rallied support from local students, schools, clergy, principals, and her parish at St. Joseph in Needham. That effort led to a Monday night candlelight vigil Dec. 17 at Memorial Park in Needham. The group turned out more than 70 vigil-goers, despite the cold rain of that evening.

She invited her pastor at St. Joseph's, Father David Michael, and Reverend Gordon Swan, a local Baptist minister, to share with the group some words of spiritual guidance.

"This evening with heavy hearts we join with countless others across our country in grieving the loss of innocent children and adults in Newtown, Conn. Even -- and especially -- in times of great tragedy and sadness we stand together in hope," Father Michael said.

He said the group came together from many backgrounds and belief systems. School staff, clergy, students, and families with their children listened by candlelight.

"There is an old saying attributed to different sources, but this evening, I offer that we are here because we recognize the truth of the saying whatever its source: 'It is better to light one candle than to curse the darkness,'" he said.

Rev. Swan offered his thoughts on expressing outward signs of solidarity and community with the people of Newtown, Conn.

"You will notice on my lapel a ribbon. It is green and white. Those are the colors of the Sandy Hook School. All the children of Connecticut were asked to wear the colors green and white to show their solidarity with the town of Newtown," he said.

He said wearing the colors or ribbons can express solidarity with those affected by the tragedy.

"We all need to be united. The colors are so significant. Green is a symbol of the good earth from which we all come and to which we all return, a symbol of the resources of life, the power of life, celebration of life. And white is a beautiful symbol of peace, of purity, and eternal life," Reverend Swan said.

When Jackie Arrondo closed the vigil, she read a list of names of the victims killed in the shootings, played a recording of "Amazing Grace," and called for a moment of silence in prayer and thought for the families and victims.

Arrondo put in a full weekend of work to organize the vigil with help from her faith community, from local education communities, and from the community of Needham.

"I spent the entire weekend planning, watching the news so I could learn more about what happened, and I made flyers, sent out emails to everyone and tried to do as much contact as I could," she told The Pilot.

Arrondo explained that she felt obligated to reach out to the local community to express solidarity with the victims of such senseless violence. She said she wanted to create an event to show support for the victims in a public way, rather than just organizing an event at her school, Needham High.

"I thought it would be a better idea to have something bigger and to show more support for the people that are going through this right now," she said.

She also reached out to her parish in Needham, St. Joseph Parish, to gather support for the vigil.

"I went over there, and I knew they are a strong community, so they would get the word out," she said.

Organizing the event required more than just support from classmates and friends. Arrondo also needed help from her family, and said her care for her two younger brothers motivated her actions.

"When she came to me Saturday morning saying that she needed to use the car, and I asked her why, she told me why, and I had to do a double take," her father, Esteban Arrondo, said.

He said he felt surprised and very proud at the amount of work she put into contacting people from clergy, to school officials, and to the community.

As part of that work she reached out to St. Sebastian's School in Needham. The chaplain and the headmaster of the school attended the vigil.

Father John Arens, the chaplain at St. Sebastian School, said the troubling circumstances could lead to questions about the nature of faith, community and tragedy, but not becoming isolated from one another leads people back to love.

"I may not have all the immediate answers to questions, but we have the ultimate answer. We speak about the gift of love. That is what we are called to," Father Arens said.

The headmaster of St. Sebastian's School William L. Burke III compared the sacrifice of those who gave their lives trying to protect children in Newtown to the martyr St. Sebastian, killed by the Romans for his fealty to Christ.

"I think those six women who died heroically, fighting to protect their children, were martyred just as Sebastian was. They went down for their kids," he said.

Jackie Arrondo said she had a message for the family of Victoria Soto, a teacher who died trying to protect her first-graders.

"I have great sorrow for you. Your daughter is a hero," she said.

Other events of prayer and remembrance in the Archdiocese of Boston were held at the Paulist Center in Boston, Immaculate Conception Parish in Everett, and Our Lady Comforter of the Afflicted in Waltham.

Remembrance services were also scheduled to take place on Dec. 19 with a Holy Hour at St. Patrick Parish in Stoneham, and vigils at St. Mary's Parish in Chelmsford, Our Lady Star of the Sea Parish in Marblehead and St. Agnes Parish in Reading.