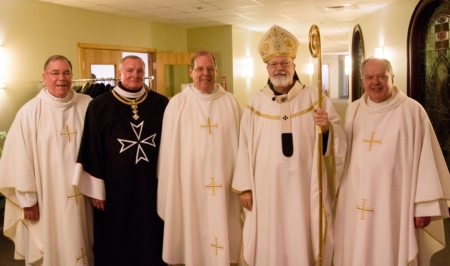 BRAINTREE -- The local knights and dames of the Order of Malta inducted Vicar General and Moderator of the Curia Bishop-elect Robert P. Deeley as a deputy chaplain of the order during their annual Advent gathering at the Pastoral Center Dec. 3.

Bishop-elect Deeley said he looks forward to providing the order with pastoral support for their local efforts in the archdiocese and beyond.

"The order is a wonderful lay-organization devoted to helping people. There is a very deep spiritual dimension to them. It is my hope that I will be able to help them as a spiritual director, which is the task of the chaplain," he said.

He said he looks forward to promoting the work of the Order of Malta as a whole, but also at the Cathedral of the Holy Cross in South Boston, where the order runs a nursing outreach program there called Cathedral Cares.

"They have for example a wonderful program at the cathedral whereby they offer health services to people in need of it, whom in many ways can be poor and needy. It is a wonderful manifestation of Christian charity, of the living out of Catholic faith, and it is a way in which I can help them to defend the faith which is at the heart of who they are as an organization in the Church," Bishop-elect Deeley said.

Cardinal Seán P. O'Malley celebrated the order's Advent Mass. The cardinal, himself a chaplain of the order, welcomed his vicar general to the order.

"Particularly in today's world, the Order of Malta is very much involved in evangelization but also in a special concern for healthcare and the sick. Of course, in both of these areas the ministries of a priest and a bishop are always important, and so we are delighted that Bishop-elect Deeley has accepted this new responsibility, which will give him the opportunity to support the wonderful ministries, activities and works of mercy of the Order of Malta," the cardinal said.

Msgr. Dennis Sheehan, a magistral chaplain of the Order of Malta, concelebrated the Mass with the cardinal. He said the induction to the order normally would have happened at the organization's gathering in November, but the vicar general had to remain in Boston for another induction of sorts.

"The American Association of the Order of Malta met in New York in November to install its new member knights, dames, and its new chaplains. Because that happened to coincide with the weekend that Msgr. Deeley was nominated as a bishop, he was unable to be with us. So, tonight the cardinal -- who is also a conventual chaplain, a senior chaplain to the Order of Malta -- is going to install Msgr. Deeley as a deputy chaplain to the American Association," he said.

He explained where the induction at the pastoral center fit in Bishop-elect Deeley's progress in serving as chaplain in the Order of Malta.

"A deputy chaplain is the first rank, shall we say, of a chaplain in the Order of Malta. Ordinarily after four or five years as a deputy chaplain, the master general of the order will name you a full-time chaplain. It is called a magistral chaplain, and it comes from the word grand master. He is the magister, so he names you a chaplain. I, for instance, am a magistral chaplain," said the 15-year veteran chaplain.

Msgr. Sheehan said because the vicar general is a bishop, Bishop-elect Deeley will advance to what is called a conventual chaplain like the cardinal "which means that he becomes more closely associated with the religious order" of the Knights of Malta.

The Boston Area is one of 26 areas of the Order of Malta, American Association U.S.A., with members from Massachusetts, New Hampshire, Vermont and Maine. The local contingent of about 250 knights and dames conducts charitable work locally under the guidance of a Boston area board.

"It has been our custom in the past ten or fifteen years to gather in Advent for the celebration of Mass and sometimes for a day or an afternoon of recollection and prayer. Tonight we are following that custom in gathering with the cardinal to celebrate the Advent season, and taking advantage of this to install Msgr. Deeley as a deputy chaplain," Msgr. Sheehan said.

During the Mass, the cardinal presented Bishop-elect Deeley with a stole bearing the crest of the Order of Malta.

Msgr. Sheehan said traveling internationally with the order, for example to an annual pilgrimage in Lourdes, the distinctive stole bearing the red shield emblazoned with the Cross of Malta helps chaplains identify themselves.

"In one fashion or another, most of the chaplains from the United States will wear a stole that resembles this, so they can be identified as chaplains of the Order of Malta," he said.

Incoming chair and knight Damien DeVasto said the local work of the order stands to benefit from the addition of Bishop-elect Deeley as a chaplain.

"We now have, through Bishop-elect Deeley, someone we know who will be very directly involved in the on-the-ground ministries of the order, but also will provide us with insight and direction as we connect our work on a local level to the work, not only here in our area and in the country, but throughout the world," DeVasto said.

The Order of Malta is a lay religious order of the Roman Catholic Church, founded during the crusades, making it the oldest order of knighthood in the world.

Members -- knights, dames and chaplains -- dedicate themselves to help the sick and the poor and to defend the faith as part of their duties to the order.

The Order of Malta started as a Hospitaller group, running hospitals in the Holy Land during the Crusades, providing medical service to those in need, irrespective of religion.

The order has carried out humanitarian aid projects in Kosovo, Macedonia, India, Southeast Asia, Afghanistan, Pakistan, Mexico, Congo, Sudan, Myanmar, Sri Lanka and Georgia. Some of the projects continue today, with support from hospitals of the order like the Hopital Sacre Coeur in Haiti.

Knights at the Advent gathering said the work requires spiritual grounding in Catholic tradition and teaching.

O'Connor said advancing through the ranks of the Order of Malta requires spiritual guidance provided by chaplains for individual members.

"Chaplains are a very critical part of the Order of Malta. Msgr. Deeley was very interested in becoming a chaplain. A year ago we started the process, and we are honored to have him," O'Connor said.

Hap Redgate, chancellor of the American Association of the Order of Malta, said the order continues its ages-old tradition of service to those in need and its tradition of defending the faith, which he said gives chaplains an important role on an individual level.

"They make themselves available to become our mentors in enhancing our own spirituality," he said. "That is the role of the chaplain, to make sure that the defense of the faith side of the equation is being done and being done effectively," Redgate.