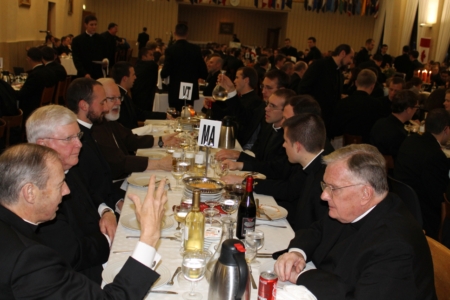 'The seminary community hosted a beautiful celebration of the Eucharist and Thanksgiving dinner. There were several hundred people there, including several American bishops and cardinals.' Pilot photo/CardinalSeansBlog.org

The Holy Father surprised everyone by announcing a consistory on the weekend of Christ the King which, of course, here in United States was also Thanksgiving weekend. For that reason, we moved up the Cheverus Awards to the previous Sunday. Father Bob Kickham traveled with me, and we arrived in Rome on Thanksgiving Day. Early in the morning, after taking a bit of a nap, we went for a walk to enjoy the beautiful weather and then went to concelebrate the Mass at the Pontifical North American College. Some people may not avert to the fact that Thanksgiving is not observed as a holiday in other countries, but because for us Americans this is such an important day, the North American College was a logical place for American ex-pats and visitors to assemble.

The seminary community hosted a beautiful celebration of the Eucharist and Thanksgiving dinner. There were several hundred people there, including several American bishops and cardinals. We concelebrated the Mass of Thanksgiving with Cardinal Edwin O'Brien, who is now the Grand Master of the Order of the Holy Sepulcher and had, at one time, been the rector of the North American College. It was a very moving celebration of the Eucharist and afterwards there was the traditional turkey dinner -- preceded by a pasta course of pumpkin ravioli! Then the seminarians sang some songs. The rector, Msgr. James Checchio, greeted everyone and thanked them for their presence. Guests were seated according to the area of the U.S. they were from, so we had Thanksgiving dinner with our seminarians and Msgr. Connie McRae, Msgr. William Helmick and Father Nichols as well as two seminarians from Vermont. They had markers for the tables of the different areas. On our table was a photograph of Plymouth Rock to remind people that the first Thanksgiving was in our state. The Vermonters had syrup and a Yankee Candle.

Saturday (11/24) was the consistory at St. Peter's Basilica. The ceremony has been somewhat streamlined and takes place in one ceremony. Previously, there was a separate "ring Mass" the day following the consistory. Now, the new cardinals receive the red hat, cardinal's ring and the assignment of their titular church in one celebration and the following day is simply Mass of Thanksgiving. The fact that there were only six Cardinals named made for a shorter ceremony but, more importantly, gave us the opportunity to interact with each of the new cardinals. It was very nice to be able to get to know them. The Holy Father of course gave wonderful homilies, both at the consistory on Saturday and the Mass for the Feast of Christ the King on Sunday. Following the consistory, people have an opportunity to greet the new cardinals in the Apostolic Palace.

There was a luncheon afterwards at the North American College with many of the American cardinals, bishops and pilgrims to honor Cardinal Harvey. His immediate family, including his mother, was with him. At the lunch, Cardinal Harvey gave another address that was very witty, yet very profound. Besides being given his titular church of St. Pius V in Rome, the Holy Father has named Cardinal Harvey archpriest of the Basilica of St. Paul Outside the Walls, one of the major basilicas of Rome and the site of the tomb of St. Paul. It is staffed by the Benedictines and they have a monastery there.

Meeting with the Jewish Anti-Defamation League

Tuesday (11/27), Father David Michael of our Office of Ecumenical and Interreligious Affairs and I met with Derek Shulman, the regional director of the Jewish Anti-Defamation League and members of his board of directors at the Cathedral. They came to speak about preparations for the 100th anniversary of the ADL and the 50th anniversary of Nostra Aetate. The ADL has worked very closely with the archdiocese on some educational programs and interreligious outreach and we look forward to working with them on these issues as well.