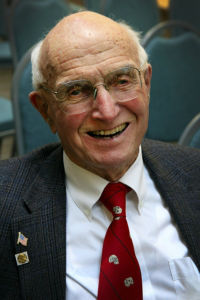 Dr. Joseph Murray, the Catholic surgeon who conducted the world's first organ transplant, died Nov. 26 at Brigham and Women's Hospital in Boston, the same hospital where he performed that groundbreaking surgery in 1954. Murray, who won a Nobel Prize and a Laetare Medal among his many honors, was 93 years old. He is pictured in a 2010 photo at the College of the Holy Cross in Worcester, Mass. (CNS photo/John Buckingham, courtesy College of the Holy Cross)

BOSTON (CNS) -- Joseph Murray, the Catholic surgeon who conducted the world's first organ transplant, died Nov. 26 at Brigham and Women's Hospital in Boston, the same hospital where he performed that groundbreaking surgery.

Murray, who won a Nobel Prize and a Laetare Medal among his many honors, was 93 years old. He had suffered a stroke on Thanksgiving.

A graduate of the College of the Holy Cross in Worcester, Mass., Murray could have pursued a career in athletics. He had excelled at football, baseball and hockey in high school. Once at Holy Cross, though, he found that baseball practice and lab schedules conflicted, so he dropped baseball. Murray also enjoyed tennis, biking and swimming.

Murray later attended Harvard Medical School. After graduating, he joined the Army and studied surgery at Valley Forge General Hospital in Pennsylvania, where he treated soldiers wounded in World War II. It was while in the Army that he became interested in skin grafts for wounded soldiers as well as organ transplants.

His first successful organ transplant was a kidney transplant in 1954 from one brother to his identical twin. Murray reportedly knelt in prayer with his family before the operation. The patient lived eight years with his brother's kidney; he died from the renal failure that necessitated the transplant.

Although Murray was a practicing Catholic, he once said he was subjected to backlash from some religious groups that considered transplants akin to "playing God."

As new anti-rejection drugs were developed, organ transplants became more common and more successful, with other -- and sometimes multiple -- organs transplanted during an operation.

Murray also was interested in reconstructive plastic surgery. He was credited with developing techniques to repair congenital facial defects in children. Murray once said some facial reconstructions were more difficult than transplant surgeries.

He served as chief plastic surgeon at Boston Children's Hospital from 1972 to 1985 and retired as professor of surgery emeritus in 1986 from Harvard Medical School. Murray continued in his field afterward as a lecturer, writer and consultant.

In 1990, Murray, along with E. Donnall Thomas, received the Nobel Prize in physiology or medicine for work in lifesaving techniques used in organ and tissue transplants due to his research of the human immune system. Murray donated his share of the Nobel award to Harvard Medical School, Brigham and Women's Hospital and Boston Children's Hospital, where he had also treated plastic surgery patients.

Murray was one of four Americans, and nine overall, appointed to the Vatican's Pontifical Academy of Sciences in 1996. He was also a fellow of the American College of Surgeons and an honorary fellow of the royal colleges of surgery of England, Ireland, Edinburgh (Scotland), Belgium, Canada, Australia and Singapore.

In 2001, Murray published his autobiography, "Surgery of the Soul: Reflections on a Curious Career."

In 2005, Murray received the Laetare Medal from the University of Notre Dame for his accomplishments in organ transplantation.

"Work is a prayer," Murray once told an interviewer. "And I start off every morning dedicating it to our Creator."

Murray married Virginia Link in 1945, with whom he had three sons and three daughters. His wife and children survive him, as do 18 grandchildren. His funeral Mass was to be celebrated Dec. 1 at St. Paul Church in Wellesley, Mass., with interment Dec. 3 at Edgartown Cemetery on Martha's Vineyard.