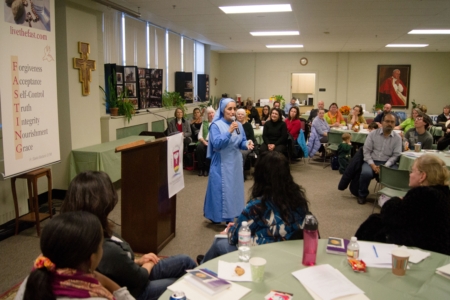 Mother Olga Yaqob, founder of the Daughters of Mary of Nazareth speaks on the importance of fasting at the Nov. 24 one-day retreat "Prepare the Way for the King." Pilot photo/Christopher S. Pineo

BRIGHTON -- Though fasting is associated more closely with Lent, nearly 100 people came out for "Prepare the Way for the King" a one-day retreat focused on fasting as part of Advent.

Live the Fast, a program of Waltham based LaVallee's Fasting Breads LLC, welcomed 96 participants to the Brighton campus of the Theological Institute for the New Evangelization Nov. 24 to hear from experts on fasting in the Catholic tradition.

"The idea of fasting before Christmas is so contrary to the commercial idea or the secular idea of Christmas," said Justin Bell, director of LaVallee's Fasting Breads.

"By doing fasting it gives us a sense of the priorities, and it can remind us too of the poverty with which Christ the King was born into the world in Bethlehem," he said.

Father Nolan, who is pastor of St. Mary Parish in Waltham, introduced the topic and gave a definition of what fasting should be -- as opposed to what it often becomes. LaVallee's Fasting Breads calls Father Nolan's parish the spiritual home of their efforts promoting the values of fasting in Catholic life.

"What is fasting? Fasting is voluntary withholding from eating, voluntarily not eating food for a varying length of time. Fasting is not starvation," he said.

He said other religions also include the tradition of fasting, and sometimes people without religion even fast for other reasons -- such as brides who fast before weddings.

"Christians fast for a different reason. We fast not for health reasons, not for vanity, but we fast so that we can become merciful, so we can come into communion with the God who is mercy," Father Nolan said.

He described some traditional Catholic ways of fasting, including only eating bread and water and observing standards of fasting set forth in dioceses during seasons associated with fasting.

He recognized the historical importance of community in maintaining discipline as challenges of fasting face individual Catholics.

"It's not supposed to be a private discipline. That was why we had fast days. We are all doing this together. We know we are not supposed to eat meat on Fridays," he said.

After a short break, the founder of LaVallee's Bakery Distributors and LaVallee's Fasting Breads, Andy LaVallee, gave a witness talk to the power of fasting.

"Everybody wants to be involved with stopping abortion, promoting family life. Just go right down the whole list. We need more priests. We need more vocations. But how much can you do? Well, you can do it all through sacrifice in prayer and fasting," he said.

LaVallee detailed his journey of faith that eventually led him to start a company to promote and educate Catholics about fasting. He said the journey began when actor Jim Caviezel insisted that the bakery entrepreneur accompany him on a trip to Medjugorje in Bosnia and Herzegovina.

With a bakery industry pedigree begun in 1969, LaVallee returned to Medjugorje on subsequent trips to investigate and learn about fasting breads.

He pointed out that a priest named Father Svetozar Kraljevic gave him poignant encouragement to start commercially investing in fasting breads.

When LaVallee asked why no one had attempted it before, the priest told him that "our Lord has saved this task for you."

"For those of you that may know Father Svet, he's 6'5". He's a big, tall man. You don't want to disappoint him," LaVallee said.

Running LaVallee's Bakery Distributors since 1977, LaVallee started LaVallee's Fasting Breads as a new company and kicked off Live the Fast in Lent.

After the rosary and a lunch break, Bell gave a talk about taking time to enjoy the season of Advent, slowing things down by cutting the intake of media.

He recommended taking "off the grid" time -- turning off cellphones, avoiding checking emails and abstaining from social media -- during personal interactions, while driving and particularly on Sunday.

"Sunday, the Lord's day, this should be a day that is different, set apart, a day for re-creation, our day to be recreated, to rest. He created it for us," Bell said.

After Father Matt Williams, director of the Office for the New Evangelization of Youth and Young Adults, led a Holy Hour with eucharistic adoration and offered the Sacrament of Reconciliation, Mother Olga anchored the talks with her witness and reflection on the power of fasting.

"If fasting does not change us from within, it is not real fasting," she said.

She said fasting must be spent in more productive contemplation than simply anticipating the next meal or the end of a fasting season.

Father Williams celebrated the closing Mass for the retreat.

In the homily he said values can become confused as priorities shift in life when people pursue worldly honor.

"The beautiful, beautiful retreat experience like this today puts it all in the right order, that the greatest honor that you have is that you are. You are a son and a daughter of the Heavenly Father," he asked.