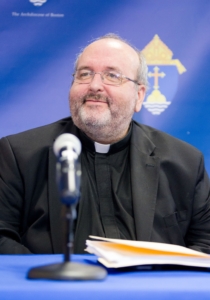 BRAINTREE -- Father Paul R. Soper is welcoming his appointment as director of the Office for Pastoral Planning, because he feels enthusiastic about the pastoral plan, "Disciples in Mission." He has been serving as interim director of the office since April.

"I like the pastoral plan. I really believe in it. I have a great deal of hope that it can be a way forward for the archdiocese," Father Soper said.

The cardinal made the announcement of Father Soper's appointment at the Nov. 15 press conference at which he announced his approval of the pastoral plan to address the Archdiocese of Boston's need to focus on evangelization even in the face of declining numbers of priests.

Although the plan calls for the archdiocese to organize its 288 parishes into approximately 135 parish collaboratives, Father Soper said the plan allows flexibility.

"I like its flexibility. I like its emphasis is on local structures. I like the fact that it is parish based, that it is about strengthening the work of the Church in parishes," he said.

Father Soper said he looks forward to helping parishes fulfill their role in the new evangelization.

Father Soper spoke with The Pilot on Nov. 21 about his appointment and his background.

He said growing up in Weymouth, his mother had a needlepoint portrait of their house she had made. On it were sewn the words "As for me and my house we will serve the Lord."

His family life before college not only prepared him for the priesthood, it also stimulated an interest in science.

After studying astrophysics and astronomy at Harvard, he decided to become a priest after he was asked to consider a vocation. He enrolled at St. John's Seminary, and was ordained in 1990.

His interest in stars still stimulates his interest in the divine. He said the light a star sheds throughout the universe via its atomic processes gives glory to God -- though a star has no consciousness.

"There is a certain sadness in it, that they are giving glory to God, but they can never know it. So, in a sense when I look up into the sky either just on a starry night -- look up and try to absorb it, or when I point my telescope at the star, or if I sit down and study the dynamics going on inside the star, or something like that, I am helping that star to fulfill its purpose," he said.

Father Soper said his background in science will serve him well quantifying and analyzing data, a key component in implementing the pastoral plan.

"On an ongoing basis, working with the data that we are getting back from collaboratives and trying to figure out what that data is telling us about how the collaborative is doing and what the strengths and weaknesses of the plan are, somebody with a background in data is necessary," he said

Vicar General and Moderator of the Curia Bishop-elect Robert P. Deeley said Father Soper was chosen for the permanent position after a thorough search.

"Father Soper showed himself extraordinarily capable of holding the position and of leading us forward in the way that we want, both as a person with the skill set necessary to technologically put the pieces together, and as a priest with a real pastoral sense," Bishop-elect Deeley said.

Father Soper said he let his parish St. Albert the Great Parish in Weymouth know about his appointment the night before the press conference, when he met with the vice-chair of the parish council and the head of the finance council.

The two sent out an email to their respective councils as soon as the announcement was made.

"This way we were able to let the parish know as much in real-time as possible. That was Thursday afternoon, by Thursday night a fair amount of the parish knew," Father Soper said.

He announced the change to the parish at each Mass the following weekend.

"In one sense we are thrilled that he has this opportunity and in another sense sad that he is leaving," Patti Perkins, 68, a parishioner of St. Albert's, said.