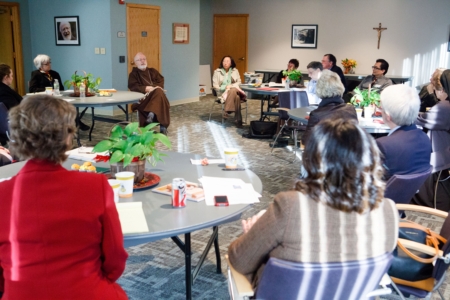 'In the afternoon (11/21), I met with the pro-life directors from the New England dioceses.' Pilot photo/CardinalSeansBlog.org

Later that day (11/15), I took part in an online chat on Boston.com. The Globe periodically invites people to conduct a sort of live interview, in which people send questions and you type your responses. I was answering questions for about an hour and I understand there were about 400 people following the discussion. This was a new experience for me -- I had never been in a "chat room" before! I had my misgivings originally, but in retrospect I understand that this is something young Catholics are participating in and it is another way for us to reach them. Obviously, the newspaper has also discovered readership of broadsheets is shrinking and the Internet is the way that people are getting their news and connecting.

Then, in the afternoon (11/15) I was visited by Ed Condon to speak about the Domus Jerusalem project. This is an effort begun at the urging of the late-Archbishop Pietro Sambi to build a Catholic center in Jerusalem next to the site of the Garden of Gethsemane and overlooking the Temple Mount. I was asked to be the president of the foundation supporting this effort. God willing, we will have a group of people interested in helping this project visit the Holy Land in the spring, coinciding with the time that I am there on the retreat with our priests.

Later that day (11/17) I presided at the annual installation of new members of the Equestrian Order of the Holy Sepulchre of Jerusalem Northeastern Lieutenancy of the United States. As the grand prior of this lieutenancy it is a privilege to install the new members of the Order. John Monahan is Lieutenant. In all, there were about 40 people who were invested into the order. The Order of the Holy Sepulcher has a wonderful tradition that goes back to the 13th century. They are very supportive of the Christian community and sacred places in the Holy Land and they do very important work to keep the schools, clinics and shrines running in that part of the world. Cardinal Egan was invited to be the keynote speaker at the banquet following the Installation Mass. We were also pleased to be joined by a number of other bishops as well, including several from New England.

Wednesday (11/21), I conducted an interview with Jon Keller of WBZ. We spoke on a number of issues including our efforts to defeat the physician assisted suicide ballot initiative and the granting of in-state tuition to undocumented immigrants. If you didn't happen to catch it when it aired, you can view it here.

In the afternoon (11/21), I met with the pro-life directors from the New England dioceses. The directors meet twice a year at the Pastoral Center to discuss current pro-life issues and share resources and information on programs they are conducting. Several dioceses have new pro-life directors who were attending their first meeting. I shared with them some reflections on our efforts to defeat Question 2 and its implications nationally and also for the other New England states.