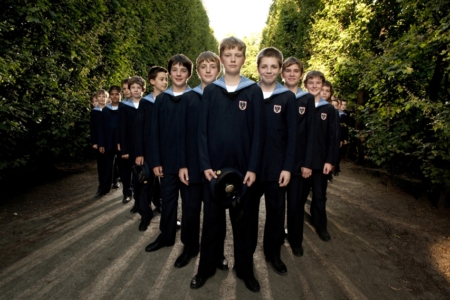 BOSTON -- Radio personality and voice of the Boston Symphony Orchestra, Ron Della Chiesa, will host a holiday concert "Christmas at the Cathedral of the Holy Cross with The Vienna Boys Choir" Sunday, Dec. 2 at 3 p.m.

"This is a rare opportunity to hear this highly regarded choir in a magnificent setting, in one of the greatest cathedrals in America and it's particularly wonderful during the holiday season," Della Chiesa said. "My wife Joyce and I were married in this Cathedral 26 years ago and I am also a regular lector there."

The choir sings in a tradition with roots in the Vienna court of Emperor Maximilian I in 1498. The choir sang exclusively for the court until 1918, after the breakdown of the Habsburg empire. The choir survived, avoiding takeover by the Austrian government, and flourished under the dean of the Imperial Chapel Joseph Schnitt in 1921. The court choir became the Wiener Sangerknaben, adopted the sailor suit as a uniform, and started giving concerts in 1926.

Today 100 choristers between the ages of ten and fourteen, divided into four touring choirs, give around 300 concerts and performances each year in front of almost half a million people with each group spending nine to eleven weeks of the school year on tour. They visit virtually all European countries, and they are frequent guests in Asia, Australia and the Americas.

The choir includes medieval, contemporary and experimental music in their repertoire. The choir receives education at the Augartenpalais in Vienna, where students receive the opportunity to sing in the choir after being selected at age 10.

General admission tickets are available for $34 each at www.etix.com or by calling 617-542-5682. The Cathedral of the Holy Cross is wheelchair accessible.