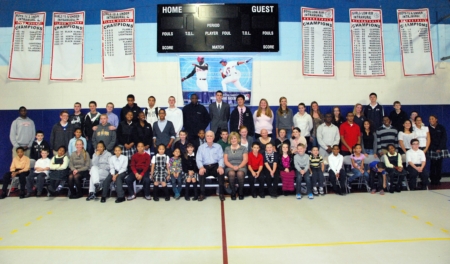 DORCHESTER -- Twenty years ago, a gift from the Marr family spurred the creation of a program that today grows and continues to expand opportunities in Catholic education for children at a youth center in Dorchester.

After Daniel Marr, Jr. left $575,000 to the archdiocese through a life insurance policy in 1992, the Boys and Girls Club and the Archdiocese of Boston partnered to provide scholarships to Boston Catholic schools for young members of Dorchester's Colonel Daniel Marr Youth Center through the Daniel Marr, Jr. Scholarship Program.

In an interview with The Pilot Nov. 16, Robert L. Marr, 76, brother of Daniel Marr, said the archdiocese invested the money and used the profits to sustain the scholarship fund going forward to benefit children at the center.

Marr said the investment by the archdiocese grew the original sum to over $860,000, which allowed the continued growth and distribution of scholarships over the years.

"It made perfect sense. The archdiocese would still have the benefit of the money, but the kids in the neighborhood would benefit annually," Marr said.

The brothers built and opened the Boys and Girls Club in Dorchester. Named for their father Colonel Daniel Marr who died in 1969, the center opened in 1974.

The mayor of Boston at the time, Kevin H. White came out for the ribbon-cutting ceremony on the Fourth of July.

Robert Marr said the facility helps young people develop a sense of community through programs, activities and interaction with adults and other young people.

Over the years Robert Marr sometimes encountered young people who had grown up with the benefit of the Boys and Girls Club.

He recalled meeting such a man in the chapel where he goes to Mass, Our Lady of Good Voyage on Northern Avenue in Boston. That day the community welcomed a new priest.

"He went down to the end of the church by the door, and was shaking hands with everybody as they left," Marr said.

When Marr welcomed the priest and introduced himself, the priest recognized his name. He asked if Marr had a connection to the Boys and Girls Club in Dorchester.

Marr said the priest told him he would not have sought ordination without the influence of the club in his life.

"You bump into people like that and you feel very, very good about them that they have made a great success of their life, and they are spreading the joy around the whole community," Marr said.

Marr said he recently talked to scholarship recipients and their families about the history of the scholarship and the connection with his family. He said after the talk, families lined up to shake his hand in recognition of the opportunity to receive a Catholic education.

Robert Marr, president of Marr Companies, runs a fourth-generation construction company started in 1898 and said he plans to continue the legacy of his family in the future.

"In my will, I am going to create another scholarship fund which will supplement this program," he said.

Marr said the contribution left by his brother not only granted the community of young people in Dorchester an opportunity, it also bestowed a proud legacy in the continuance of Marr family tradition.

"It benefits so many people, including the people who started it to begin with," he said.