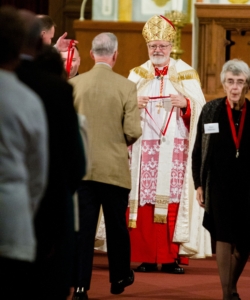 SOUTH END -- Cardinal Seán P. O'Malley presented 122 laypersons, deacons and religious with the 2012 Cheverus Award medals during a Nov. 18 Vespers service at the Cathedral of the Holy Cross.

"We add all of you to the list of blessings that we thank God for this week on Thanksgiving," the cardinal said in his homily.

After the homily, the cardinal congratulated each honoree and placed over their head the oval-shaped, sterling silver medal, bearing the likeness of Boston's first bishop Jean-Louis Lefebvre de Cheverus.

The annual award ceremony and prayer service recognizes honorees in the Archdiocese of Boston for long-term service to the Church.

Addressing the guests and honorees, who nearly filled the 1,700 seats in the cathedral, Cardinal O'Malley detailed the history of the award through its namesake, Bishop Cheverus.

Ordained at age 22, the native of Mayenne, France, Father Cheverus defied the anti-Catholic strain of the French Revolution.

"He was confronted by the bishops of the revolution demanding that he take an oath by which he would renounce his loyalty to the pope, that he would receive all of his instructions from the revolution," the cardinal said.

He refused and was imprisoned, but later escaped to London, where he learned English. Father Francis Matignon, a fellow refugee of the French Revolution living in Boston, invited the future bishop to Boston in the late 1700s.

"Father Cheverus was a very hard-working, holy priest who won the admiration of the Catholics and Protestants alike," the cardinal said, of the bishop's 27-year service to the Church in Boston before he was recalled him to France in 1823.

The cardinal said Bishop Cheverus ministered to indigenous people in New England, bound the small population of local Catholics together, and solidified the Catholic legacy in Boston. He died in 1836 in France as the Archbishop of Bordeaux at age 68.

The cardinal pointed to Bishop Cheverus' motto, "diligamus nos invicem" ("Let us love one another").

"We are here to say thank you to our Cheverus Award recipients for living that commandment of love in so many wonderful and concrete ways that lie visible among us," the cardinal said.

Among this year's award recipients were Peter and Laura Chan of Stoneham, who received the award for their work supporting the Chinese community at St. James the Greater Parish in Boston.

"He was the first altar server they had," Laura Chan said of her husband's service to the parish in Boston's Chinatown.

Peter Chan noted his wife's years of service on the Archdiocesan Pastoral Council.

He said their Chinese heritage intersects with their Catholic identity in upholding traditional values.

"In the fact that we are of Chinese ethnic origin, we have a strong sense of family, a strong sense of community. I think the Catholic faith is also very strong in terms of (teaching) we are all of the same family. We are brothers and sisters in Christ, so I think it is very well complimented," he said.

Cheverus Award recipient Joyce Durst, of St. Angela's Parish in Mattapan, also cited the influence of her heritage in living the Catholic faith. A Texan by birth, she said getting involved in the Church day-to-day came naturally as a result of her upbringing.

"My grandmother, my aunt, and the nuns -- the Josephite nuns -- always just had us involved," she said.

Religious education coordinator Bernadette Obas of the Haitian community in St. Angela Parish in Mattapan said in addition to her work for the Church, which earned her the award, she sees her work in nursing as service in the Catholic tradition.

"Definitely, it is a vocation still helping people," she said.

The archdiocese first presented the award in 2008 at the conclusion of the archdiocesan bicentennial. Each year, the archdiocese invites one third of its parishes to nominate a parishioner, giving each parish the opportunity to have one honoree every three years.

"Cheverus' motto reminds us of Jesus' commandment that we love one another, that we love his body the Church, not just in some abstract theoretical way, but in a very concrete and specific way by living that love for our fellow disciples in the Church," the cardinal said.