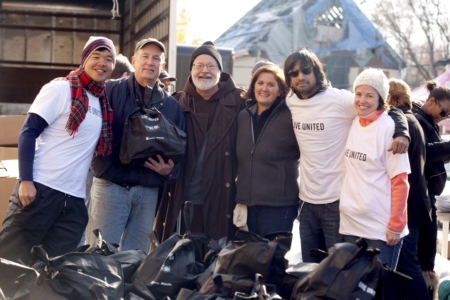 Catholic Charities of the Archdiocese of Boston gave out 3,175 meals to families in need throughout Boston and the surrounding communities that week.

With a continued rise in food prices, the demand for assistance remains high, so Catholic Charities in Dorchester provided the project's largest distribution site at Yawkey Center where the cardinal joined the work.

In addition to corporate support, hundreds of local volunteers donated their time over the past week, packaging the 7,000 Thanksgiving grocery bags and over 150,000 pounds of food at 100 Summer Street in downtown Boston in space donated by Equity Office. Volunteers will also donate their time distributing meals throughout the region.

Catholic Charities provides approximately 140 programs and services throughout eastern Massachusetts. These services respond to the needs of the poor and working poor, provide supportive services to children and families, and assist refugees and immigrants as they become active participants in their communities. Last year, Catholic Charities served more than 180,000 people in need, regardless of faith.