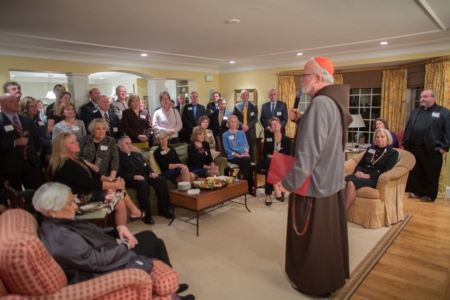 Last Thursday (11/8) The Sisters of St. Joseph had a gala dinner at Anthony's Pier 4 to support the work at Bethany Health Care Center. During the evening they honored Tom O'Brien, the former president of Tom O'Brien Hyundai in Quincy with their first "Making a Difference Award." Bethany Health Care Center is one of the best run long-term care institutions in the state of Massachusetts. They always received the highest ratings. Primarily, it is for the Sisters but they also have lay people there. It is very comforting to see the sisters who have served the Church so generously and faithfully for decades have this very first-class care that they receive at Bethany. We congratulate Sister Jacquelyn McCarthy and the Sisters of St. Joseph on this wonderful institution and we are so glad that people in the community are supportive of them.

I spent much of the rest of this past week at the annual fall gathering of the U.S. Conference of Catholic Bishops. I arrived in Baltimore on Saturday (11/10) and we had meetings of the Committee on Clergy, Consecrated Life and Vocations and the subcommittee on the Church in Latin America. On Sunday (11/11), we had meetings of the Pro-Life Committee and the Board of Directors for the National Shrine of the Immaculate Conception. At the end of this meeting my three-year term as chairman of the committee began. I was elected as head of this committee at last year's fall meeting of the USCCB. One serves as chairman-elect for a year, giving the incoming chairman an opportunity to become acquainted with the workings of the committee. Monday morning (11/12) we began with the Opening Mass celebrated by our president, Cardinal Timothy Dolan. After that we began with the regional meetings and then we had the president's address. Cardinal Dolan made the centerpiece of his remarks the importance of promoting the Sacrament of Penance during this Year of Faith, which is also one of the statements that came out of this conference. We were addressed by Archbishop Vigano, the papal nuncio, who has now been here for one year. He arrived last year during our meeting to begin his tenure as nuncio. We also received reports from our representatives at the Synod on the New Evangelization.The meeting of the Pro-Life Committee was presided over by Cardinal Daniel DiNardo of Galveston-Houston, as he was winding down his tenure as chairman of the committee. There were discussions about the 40th anniversary of Roe v. Wade and other issues that we face going forward. We all expressed our gratitude to Cardinal DiNardo and the other committee members for their fine work over the last three years.