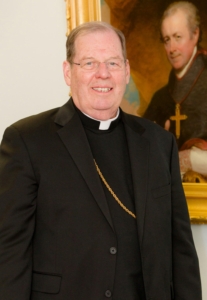 Pope Benedict XVI named Vicar General and Moderator of the Curia Msgr. Robert P. Deeley an auxiliary bishop of the Archdiocese of Boston Nov. 9. In a press conference that day it was announced that Cardinal Seán P. O'Malley will ordain him to the episcopacy at the Cathedral of the Holy Cross in Boston Jan. 4, 2013. Pilot photo/Gregory L. Tracy

Cardinal Seán P. O'Malley will ordain Bishop-elect Deeley to the episcopacy at the Cathedral of the Holy Cross in Boston Jan. 4, 2013.

"Our new auxiliary bishop demonstrates the characteristics of Boston's wonderful priests. He loves the Church. He is a man of prayer and devotion. He is a hard worker. I have been blessed to have him at my side in this past year, and I know that we will all continue to be blessed by his ministry and leadership as a bishop," the cardinal said at a press conference held at the archdiocese's Pastoral Center that day.

The bishop-elect will continue serving the archdiocese as vicar general and moderator of the curia. Speaking to the media, he explained what this means for the Archdiocese of Boston.

"I will continue my responsibilities here in the Pastoral Center as the moderator of the curia and the vicar general for the archdiocese, which are very important roles, but I will also, as a bishop, be able to represent the Church and the cardinal in those contexts in which that is important," Bishop-elect Deeley said.

He said the cardinal has already scheduled him to participate in confirmations.

"On Sunday I will go to the (U.S. Conference of Catholic Bishops) meeting in Washington, so I am able to be of assistance to the cardinal and to the other bishops in that context as well," he said.

As part of the appointment, the pope assigned Bishop-elect Deeley the Titular See of Kearney, which later became the Diocese of Grand Island in Nebraska in 1917.

"Every bishop has a diocese, and it was very kind of the Holy Father to choose one for me that was located in the United States," Bishop-Elect Deeley said.

Bishop-elect Deeley, 66, is fourth in a family of five sons. His younger brother, Father Kevin Deeley, serves as pastor of St. Michael Parish in North Andover.

He was born in Cambridge and was raised in Belmont. His parents, Michael and Mary, now deceased, came to the United States from their place of birth in County Galway, Ireland. The family later joined Sacred Heart Parish in Watertown. The bishop-elect attended Matignon High School in North Cambridge, graduating in 1964.

Following high school, he worked to discern a vocation to the priesthood at Cardinal O'Connell Minor Seminary in Jamaica Plain. He went on to study philosophy at The Catholic University of America in Washington, D.C., and graduated in 1968.

After a year of post-graduate studies, he attended the Pontifical North American College in Rome for his theological formation. At the Pontifical Gregorian University in Rome, he earned a degree in theology (S.T.B.) in 1972. Cardinal Humberto Medeiros ordained him to the priesthood at his home parish on July 14, 1973. He returned to the North American College in Rome for a doctorate in canon law (J.C.D) in 1986.

"My studies in canon law have been very, very helpful to me in understanding how I can better serve God's people. The ultimate purpose of the law of the Church is the salvation of souls," he said.

"Every service that we do, as priest, bishop, cardinal, pope, is to help people to be saved in Jesus Christ," he said.

After returning to the archdiocese, he served on the Metropolitan Tribunal in various capacities. He was named judicial vicar, the archdiocese's top canon law official, in 1989 and became the president of the Canon Law Society of America in 2000. In 1999 he was also named pastor of St. Ann's Parish in Quincy.

Bishop-elect Deeley's expertise in canon law led him to be called back to Rome in 2004 to serve at the Congregation for the Doctrine of the Faith, helping to work through the backlog of canonical cases relating to the clergy abuse scandal.

"My experience in Rome was a wonderful experience of the universality of the Church. I had had that before in my studies, but to actually work with people from all over the world who are part of the core of the Church is very important," he said.

The bishop-elect said he worked closely with the future pontiff at that time, and recalled having coffee with Cardinal Ratzinger before staff meetings in which the cardinal would ask how the 2004 U.S. elections where going.

Speaking to the media, Bishop-elect Deeley would not speculate as to whether his work past with Pope Benedict led to his appointment as bishop.

He continued his work at the Vatican until 2011, when he was named vicar general and moderator of the curia of the archdiocese.

Following the press conference, a Mass of thanksgiving was held in the Pastoral Center's Bethany Chapel.

Delivering the homily, the bishop-elect said he would have to change his usual practice of delivering short homilies.

"In my experience with the Church, bishops always preach for at least a half hour," he joked with the congregation.

Marion Dauwer, 86, attended the Mass and said she has known Bishop-elect Deeley since the time of his first priestly assignment at St. Bartholomew's Parish in Needham.

"He knows all my children. He has been at their graduations and their weddings and has helped me with my brother's funeral. Just a wonderful, wonderful man," she said.

"He had a way with everybody, and that has continued over the years as he has watched children in our parish grow up and has performed their weddings, kept in contact with them, probably has baptized many of the children of the parents that he met," she added.