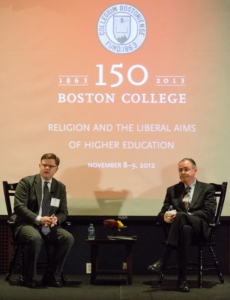 "One of the questions that we deeply want to engage as part of that sesquicentennial is our heritage and to reflect on our mission so that we can have another 150 years and more of being this vibrant university that is Jesuit and Catholic," said Boston College president Father William P. Leahy.

The symposium addressed the question of what sets religious colleges and universities apart from secular institutions, even though they pursue very similar educational goals and methods.

In his opening keynote, Wake Forest University president Nathan Hatch outlined five points for establishing an institution's distinct religious identity while, at the same time, addressing the educational needs of a student body that does not always share that identity.

"Leadership is critical. To develop anything like a distinct identity will take formative leaders and great creativity. It will not be a natural evolution. It will not just happen," he said.

He said this will be more difficult for Catholic universities and colleges due to the short supply of priests and religious who, in times past, established and upheld the identities of Catholic institutions.

He said hiring and developing faculty in line with the identity of religiously affiliated colleges and universities must take priority in this work. He then pointed out that new funding coming into schools can also be used to establish programs on campus that underscore the religious identity of the institution.

He also encouraged a dedication to real diversity on campuses, which includes tolerance toward conservative-minded individuals.

"Some of the sharpest divisions in our society involve things that most American Catholics have a heavy stake in: the rights of women and the rights of the unborn, the nature of marriage, the priority of free enterprise and of individual rights, and the priority of solidarity in the common good," Hatch said.

Finally, he said religiously affiliated colleges and universities must give students something to believe in.

Presidents of six universities also attended the symposium to explore the challenges and distinctive contributions of religiously affiliated colleges and universities to higher education in the United States.

Eboo Patel, the founder and president of Interfaith Youth Core, served as a panelist Nov. 9 and told The Pilot he strongly values and supports Catholic education.

"I just want to say as an American Muslim, I am very grateful for Catholic institutions -- universities, hospitals and schools. My mom went to Catholic schools in India. My dad came to America because of Notre Dame. We sent my son to a Catholic pre-school," he said.

He said he appreciates that universities and colleges can promote sets of ideals while running concrete programs which articulate Catholic identity and moral character.

"There is a 'there' there. There is a heritage. There is an identity and it is clear, but it is one that articulates a bridge and not a barrier," he said.