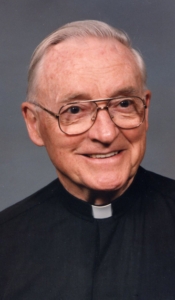 Father John P. Kelly passed away Nov. 4 at the Jeanne Jugan Residence in Somerville. He was 95 years old.

Born March 8, 1917, he was one of 10 children of William F. and Catherine M. (Hickey) Kelly of the Mission Hill section of Roxbury. He was the brother of the late Francis, Leo, Thomas, Joseph, Mary, Marguerite, Eileen, Elizabeth and Father Vincent J. Kelly, CSsR of Mission Church.

He studied at St. John's Seminary and was ordained to the priesthood by Archbishop Richard Cushing June 29, 1945 at the Cathedral of the Holy Cross.

In September 1956 he began what was to become a decades-long ministry at St. Joseph Church in Somerville, being named associate pastor.

Between September 1970 and August 1971 he served as pastor at St. Vincent de Paul Church in South Boston and administrator of Our Lady of Good Voyage Chapel and Stella Maris Oratory in Boston.

However, on Aug. 31, 1971, he returned to St. Joseph in Somerville as pastor and moderator of team ministry, which is regarded as the first team ministry in the archdiocese. He went on to minister at the parish for over 35 years, serving as pastor until he was granted senior priest / retirement status by Cardinal Bernard Law on Sept. 1, 1992 and remaining in residence at the parish until 2006. He spent the final years of his life at the Jeanne Jugan Residence in Somerville.

Father Kelly is also remembered as a faithful member of the Pere Marquette Council of the Knights of Columbus in South Boston for 50 years.

He is survived by his nephew and his wife, John F. Toomey and Elizabeth of Dedham, and his niece, Catherine Duncan and her husband Daniel of Three Rivers, Mass., as well as many other nieces and nephews and grandnieces and grandnephews.