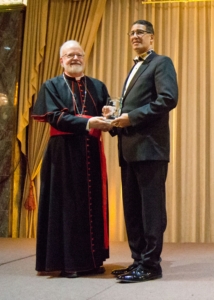 RANDOLPH -- Friends and supporters of the archdiocese's Office for Black Catholics gathered for their annual Bishop Healy Award Dinner Nov. 3 at The Lantana in Randolph.

The theme for the evening was "Be doers of the word, not hearers only," drawn from the Letter of James 1:22.

"Every year the Bishop Healy Award dinner gives us the wonderful opportunity to recognize some fine people within our community who exemplify qualities that we hold in mind such as strength in leadership, such as strong faith, and a wonderful identity as a Catholic. This year we truly are celebrating two people who are 'doers of the work,'" director of the Office of Black Catholics Lorna DesRoses said, before Cardinal Seán P. O'Malley presented the awards.

The Bishop James Augustine Healy Award is given in honor of the legacy of the first recognized black bishop in the U.S. and is presented to an individual who has exemplified strong, effective leadership and service within the Black Catholic community.

The recipient of the 2012 Bishop Healy Award was Anthony S. Owens.

Owens is a member of St. Mary of the Angels Parish in Roxbury, where he served as a member of the parish council, helped other parishioners create a food pantry, and established a relationship between the church and the Boston Symphony Orchestra -- which linked the church and communities through classical music.

Owens was introduced by Alvin Shiggs, a fellow parishioner at St. Mary of the Angels, and a prior Healy Award recipient.

"Tony is a brother. He is sincere when he tells you call him if you need him, and when you call him, he always responds. Tony greets you with a smile and a genuine desire to know that you are doing all right," Shiggs said.

In his remarks, Owens stressed the support he received from his community and his parish, working in Boston's court system over the years. In 2004 Governor Deval Patrick appointed Owens clerk magistrate in the Dorchester Division of the Boston Municipal Court Department.

"It's impossible for me to recognize each individual who has contributed to the Anthony Owens I aspire to be," Owens said, as he accepted the award.

The Robert Leo Ruffin Award is presented to individuals who have offered "selfless sacrifice, creative vision and significant service" to the Black Catholic community.

In her acceptance speech, she told the crowd that her work in conjunction with the goals of the Church emanates from the support of her family and strengthens the bonds in her family.

"A sister, a wife, a mother, an aunt, a friend, and a tireless servant of the Lord are but a few facets of this dynamic woman," said Father Oscar J. Pratt, archdiocesan Presbyteral Council member and former pastor at St. Katharine Drexel Parish in Roxbury, as he introduced her.

Beth Chambers described a kind of infrastructure of love -- built in the home, then extended into the community -- that provided an example of service as she raised two boys with her husband Meyer Chambers, director of the Archdiocese of Boston Black Catholic Choir.

"The one thing I am most proud of is the fact my children grew up learning that service to others is what we do in our home," she said.

Speaking to The Pilot after the award presentation, Meyer Chambers said his wife stands ready to provide help at any time to anyone.

"It's just a constant thing. It's the way she lives. It's who she is, and it doesn't matter who it is," said Meyer Chambers, who helped establish the award dinner in 1993 as then director of the Office for Black Catholics.

The evening's keynote speaker, Boston University law professor Maria O'Brien Hylton worked to expand on the theme of the night using the example of the Oblate Sisters of Providence, a small order of African-American nuns from the Baltimore area.

"What I would like to suggest to you this evening is that the oblates and of course thousands, and thousands of other religious men and women all around the world, offer us a great example of faith illuminated by work. These men and women, and all the lay people who work faithfully alongside them are the 'doers' that St. James was referring to," she said.

"Being here tonight for me is like a retreat. Listening to Maria, Beth and Tony makes us all so proud to be Catholics," Cardinal O'Malley said, after presenting the awards.