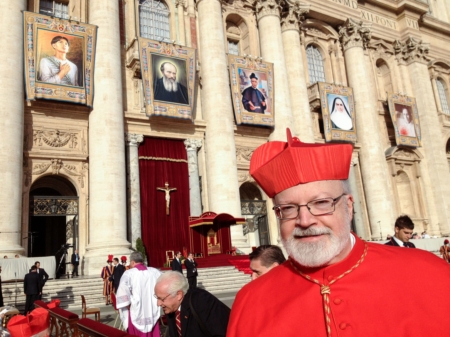 'I have spent much of this past week (10/19-10/26) in Rome to attend the canonization of seven new saints.' Pilot photo/CardinalSeansBlog.org

I have spent much of this past week (10/19-10/26) in Rome to attend the canonization of seven new saints. It was very fitting that the Holy Father chose Mission Sunday as the date for the canonization of these new saints who epitomized the Church's mission to evangelize in various aspects. Two of the new saints are Americans. Sister Marianne Cope, though she was born in Germany, came to New York when she was one-year-old. She joined the Franciscan Sisters there and then went to work for many years in the leper colony in Molokai, Hawaii. She worked alongside St. Damien of Molikai and, in fact, cared for him when he was dying.

Masses of Thanksgiving and celebrations

... The following day (10/22), there were two Masses of thanksgiving. One was celebrated by the Canadian bishops in French at the Basilica of St. John Lateran and the other was at St. Peter's Basilica. In St. Peter's, Bishop Howard Hubbard of Albany preached the homily and Archbishop Charles Chaput of Philadelphia was the principal celebrant. Archbishop Chaput's mother was a Pottawatomie Indian and he is very proud of his Native American heritage. So, it was very fitting that he would be invited to preside at that Mass. After the Mass, I was happy to greet a number of people at the reception at the North American College for the 700 pilgrims who were there from the states.

Msgr. Lance is one of the people most responsible for promoting the cause of sainthood of St. Kateri Tekakwitha, so it was wonderful that he could be present at the canonization to see the fruits of all of his labor. He was a missionary in Paraguay and later became director of the Black and Indian Mission Office. When I was Bishop in the Virgin Islands we were very blessed to have his help with many programs. His service to the Church has been invaluable.

I also spent time with the pilgrims from Blessed Kateri Tekakwitha Parish in Plymouth (which I suppose should now be called St. Kateri Parish!) The parish was established by Cardinal Medeiros in the '80s and I understand it was one of the first parishes in the world named for St. Kateri. I know the people there have always been very proud to have St. Kateri as their patroness.

On Sunday afternoon, Rome time, we actually called the parish as Bishop John Dooher was beginning a 10 a.m. Mass of thanksgiving at the parish. I was able to greet all the people from Rome by phone over the church's loudspeaker system. I spoke to them about the canonization of their patroness and assured them that while we were with their fellow parishioners in Rome we were praying for all the people back home, as well.

While in Rome, I also had a chance to catch up with a number of people. For example, I ran into Msgr. Connie McRae -- almost literally. After his retirement, he accepted the position of spiritual director at the North American College, particularly at the Casa Santa Maria. I was walking on the street and he was passing on his bicycle. ... On Saturday I had dinner with Ricky Serino, a Malden Catholic graduate who is studying at St. Anselm's College and abroad in Europe for a semester. Then, on Sunday, I had dinner with a number of Boston priests and seminarians who are in Rome. Mgsr. Moroney, the rector of St. John's Seminary, is there giving some talks at the Institute for Ongoing Formation of Priests at the North American college.