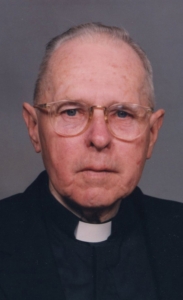 Father Joseph T. Rothwell Jr. passed to the Lord Oct. 20 at Marian Manor in South Boston. He was 87 years old.

Born June 25, 1925 in Dorchester, he was one of four children of Joseph T. and Nora (Allen) Rothwell. He was the brother of Mary Jensen and the late Margaret Kelliher and Charles Rothwell.

Father Rothwell studied for the priesthood at St. Mary College Seminary in Maryland and St. John's Seminary in Brighton, and was ordained on Jan. 10, 1952 at the Cathedral of the Holy Cross by Cardinal Richard J. Cushing.

Father Rothwell was to lie in state at the chapel of Regina Cleri Oct. 25. His funeral Mass was to be celebrated by Bishop Robert Hennessey Oct. 26 at St. Joseph Church in the West End, with interment to follow at St. Joseph Cemetery in West Roxbury.

He is survived by his sister, Mary Jensen of Natick, and several nieces and nephews.