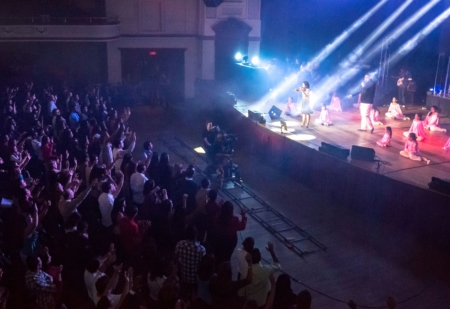 LOWELL ? Brazilians from communities all over the country gathered at the Lowell Memorial Auditorium for the sixth annual celebration of Aclamai Oct. 20 and 21. The weekend-long Catholic gathering, themed "Celebrai" ("Let's Celebrate" in Portuguese) brought together priests, music artists, catechists and laity for Masses, prayer, teachings and song.

"In 2006 we had inspiration to gather all these communities together to celebrate faith and to preach about God," Henelris F.S. Marotti, who coordinated the event with her husband Fabio Marotti, said.

"'Celebrai' means that the mission is here in Boston for ten years. We are celebrating the tenth anniversary of the mission. We use music to celebrate that," Marotti said.

Performers at the event included Adriana Arydes, Rodrigo Ferreira, Eugenio Jorge, Ziza Fernandes, Daniel Stavarengo, the Daughters of St. Paul, and Father Fabio De Melo ? a Catholic priest who released top-selling albums in 2008 and in 2009 in his native Brazil.

"The faith in Brazil is the life. Faith is just something very joyful," Marotti said.

"We are so happy that we have life in Jesus that we just sing, and preach, and we are just so alive. That is what Father Fabio (De Melo) does. He shows people how good it is to be God's children," she said.

The weekend also brought an opportunity for Brazilians to experience the Mass with Father De Melo and attend teaching workshops led by him, Rodrigo Ferreira, Astromar Braga, Juninho, and Irma Zelia.

"These people have beautiful testimonials showing that they have this long life and now they know Jesus, they know the Church, they know the sacraments. They just tell people how good it is to be a Catholic. How the Catholic Church has beautiful treasures and everything in life is here. You don't have to go anywhere else," Marotti said.

Coordinator for the Archdiocese of Boston's Brazilian Apostolate Father Jose Eduardo Marques celebrated Mass on Saturday and Sunday, with a homily delivered by Father de Melo at each Mass.

Marotti said Father Marques creates unity in the Brazilian community in the archdiocese and beyond.

"Father Eduardo is the one responsible for gathering all these communities, to make one big community," she said.

Organizers said the Aclamai this year drew more than 2,000 people, up from 1,500 last year.

"It's getting bigger and bigger," Marotti said.

The Brazilian Apostolate in Boston serves 16 communities with help from the Office of Outreach and Cultural Diversity at the Pastoral Center in Braintree. St. Tarcisius Church in Framingham serves the largest Brazilian community in the archdiocese. Outside of Brazil, the Greater Boston area hosts the largest population of Brazilians anywhere in the world. The apostolate has served the Brazilian community for 25 years.