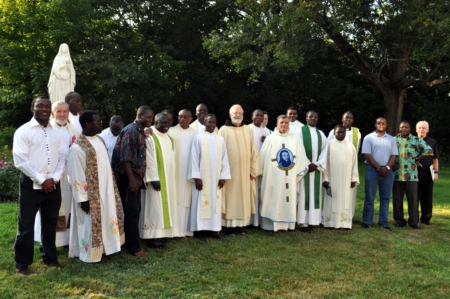 Cardinal O'Malley is pictured with the SMA Fathers at their Center House in Dedham in August. Pilot photo/courtesy SMA Fathers

In preparation for Mission Sunday, Oct. 21, The Pilot is pleased to recognize religious congregations whose primary work is mission activity.

The Medical Mission Sisters are unique in many ways. Following in the spirit of Jesus the healer, they are doctors, nurses, and almost every other kind of health-related professional. Today, the 600 members of the congregation can be found caring for the physical as well as the spiritual needs of literally millions of the poorest of the poor all over the world.

The congregation emerged out of the experiences of Dr. Anna Dengel, a native of Austria. Working in northern India, which is now the nation of Pakistan, in the early 1920s, Dr. Dengel was appalled by the unnecessary sickness and deaths of countless Muslim women and children, whose cultural and religious traditions cut them off from medical care by male physicians. Those experiences convinced her of the need for professionally trained religious sisters who could help these women. At the time, however, canon law prohibited members of religious institutions from practicing medicine.

Convinced of God's will, Dr. Dengal drew up a constitution for the community in 1925 for members who would become properly trained and "live for God" as they dedicated their lives as professed sisters. Permission was granted in 1925 to begin the new congregation and the "First Four," Dr. Anna Dengel of Austria, Dr. Johanna Lyons of Chicago, Evelyn Fleiger, R.N. of Britain, and Marie Ulbrich, R.N. from Iowa came together in Washington, D.C. to begin the Medical Mission Sisters. Once that seed was planted, the Medical Mission Sisters grew steadily and made such an impressive impact that in 1936, Rome changed its regulations and allowed the Medical Mission Sisters to make public vows in the Church.

One of the attributes common to all Catholic missionaries is the ability to meet special needs in specific areas. So while health and healing for women, children, and families remain at the forefront of their work, the sisters provide a wide array of services ranging from daycare centers to community development, and from fighting human trafficking to working with incarcerated women, and so much more.

Today, there are some 600 Medical Mission Sisters and the congregation continues to grow. The sisters come from 22 different countries and can be found doing the Lord's work in Africa, Asia, Europe, the Middle East, South America, and North America.

Women who want to make a difference in the world, are invited to visit www.medicationsisters.org, or to contact the Vocation Director of the Medical Mission Sisters at 8400 Pine Road, Philadelphia, Pa. 19111.

The Society of African Missionaries

It is no accident that the spread of Catholicism in Africa has been nothing short of spectacular. Consider, for example, the Society of African Missionaries which operates a center in Dedham.

For the past 155 years, the Society of African Missionaries has built churches, schools, health facilities, and vocational training centers for the poor, the abandoned, and the marginalized. In bringing the message of hope and joy to hundreds of thousands of Africans, the SMA Fathers work cooperatively with local bishops and clergy and prepare zealous catechist lay leaders who reach out to people with spiritual and practical needs.

Yet, the tremendous work of the SMA Fathers nearly ended before it even began. Although the SMA Fathers are saturated in distinctly Irish roots, the missionary congregation traces its history to France. In 1856, Bishop Melchior de Marion Bresillac experienced a heartfelt missionary commitment to bringing the Gospel of Jesus Christ to the people of Africa. When the first missionary priests, including Bishop Bresillac, arrived in Freetown, Sierra Leone (West Africa) in the spring of 1859, all of them were struck by yellow fever and died.

Although Pope Pius IX was deeply saddened by the news, he reaffirmed his resolve on the urgency of the African mission and reminded the SMAs that "a work thus begun shall never perish." So it was that despite its difficult beginnings, the Society of African Missionaries survived and prospered.

Cardinal Richard Cushing invited the SMA Fathers to the Archdiocese of Boston in 1946. The Center House in Dedham tasked itself with promoting awareness and seeking support for its work in the rapidly developing Church in Africa. That task continues with the blessing of Cardinal Seán O'Malley who has encouraged the new generation of the SMA Fathers assigned in the archdiocese to assist local pastors in inner city churches.

Frank Mazzaglia is associated with the Missionary Alliance, which is comprised of religious missionary congregations of priests, sisters, brothers, and lay people whose members toil in the vineyards for Christ all over the world.