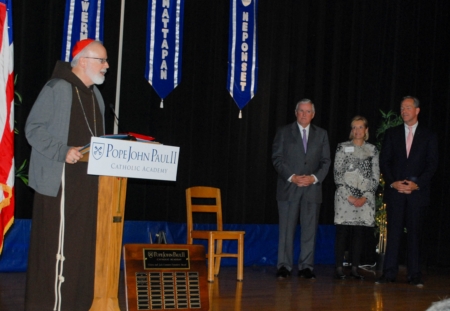 '...I went to the Pope John Paul II Catholic Academy Columbia Road campus for the reception to present John and Cyndy Fish with the academy's 2012 Eileen and Jack Connors' Founders Award.' Pilot photo/CardinalSeansBlog.org

Last Thursday (10/4), we had one of our regular meetings of the board of the Massachusetts Catholic Conference. The MCC is the joint public policy voice of the four Catholic dioceses of Massachusetts. They play a very important role on the issue of education and other important issues. During the meeting, we planned activities for the upcoming year. MCC director Jim Driscoll gave us a report on the issues relevant to the Church likely to come up in the upcoming year.

On Saturday (10/6), I was happy to celebrate the diaconal ordination of a number of Jesuits and a member of the Redemptorist order. The Mass was held at St. Ignatius Church in Chestnut Hill. The Redemptorist deacon is from the island of Grenada in the West Indies. I told him that I was ordained a bishop by a Redemptorist bishop in the West Indies, so I was happy to return the favor! I told them it was the Feast of St. Bruno and also the date that the first Jesuit arrived in United States. His name was Pedro Martinez (though not the former Red Sox pitcher, I told them!) and he was martyred in Florida. I told them it was a very auspicious date to celebrate the ordination of these young Jesuits from various provinces, including one from Singapore.

On Tuesday (10/9), I was visited by a number of members of the Priestly Fraternity of St. Charles Borromeo. Their community has come out of Msgr. Luigi Giussani's movement, Communion and Liberation. We are very blessed by their presence here, as well as consecrated lay people who belong to what is called the Memores Domini. Members of the priestly fraternity are teaching here in the archdiocese of Boston, such as Father Jose Medina, the head of the Cristo Rey School in Dorchester. I also congratulated them because their founder, Bishop-elect Massimo Camisasca, has just been named the bishop of the Diocese of Reggio Emilia, Italy.

...I went to the Pope John Paul II Catholic Academy Columbia Road campus for the reception to present John and Cyndy Fish with the academy's 2012 Eileen and Jack Connors' Founders Award. Pope John Paul II Catholic Academy is the largest primary school in Boston, public or private. The building has been beautifully refurbished thanks to the school's many benefactors and the hard work of John Fish and Suffolk Construction. He was personally involved in the refurbishment of the school as well as Trinity Catholic Academy of Brockton. Some of the largest benefactors of Catholic education in the archdiocese were present to honor him for his work: Peter Lynch, Jack Connors, Tom Shields, Jim Gallagher, Bob Atchinson, Jim Healey and Maureen Bleday of the Yawkey Foundation and Joe Petrowski, just to name a few.

The children from the school performed for us and did a wonderful job! They sang Do-Re-Mi from the Sound of Music and then they sang an anthem that has been written for the school.