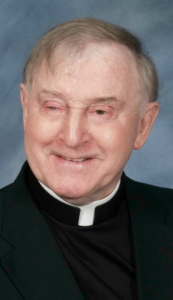 Father Lawrence E. Wetterholm passed away at the archdiocese's Regina Cleri residence for retired priests Oct. 8. He was 88 years old.

Born Sept. 12, 1924 to Hussey and Evelyn (Duquette) Wetterholm, he grew up in Brockton. He came from a family of four sons and had a twin brother, Thomas. He attended Sacred Heart Grammar School and Brockton High School, graduating with the class of 1943.

Before entering St. John's Seminary, he played minor league professional baseball with the Phillies' organization during the 1943 and 1944 seasons and with the unaffiliated Fall River Indians in the 1946 season.

He then attended St. Anselm College in Manchester, N.H. He was later president of the alumni association and received an honorary Doctorate of Law degree in 1982.

He was ordained on Feb. 2, 1956 at Holy Name Church, West Roxbury by Auxiliary Bishop Eric F. MacKenzie. He offered his first Mass on Feb. 5 at St. Colman Church in Brockton.

In July 1987, Father Wetterholm was named pastor of St. Joseph Parish in Ipswich.

On July 1, 1997, the Ipswich parishes of St. Joseph, Sacred Heart (French) and St. Stanislaus (Polish) merged into a new parish with the name Our Lady of Hope. Father Wetterholm served as pastor of Our Lady of Hope until he was granted senior priest-retirement status in November 2002.

He became a resident of Regina Cleri in January 2003.

Interment was at Calvary Cemetery in Brockton immediately following the funeral.

He is survived by his nieces, Sue Creedon and Cathy Sawyer, and his nephews, Paul Wetterholm and Jay Wetterholm, all of Brockton, as well as several grandnieces and grandnephews.