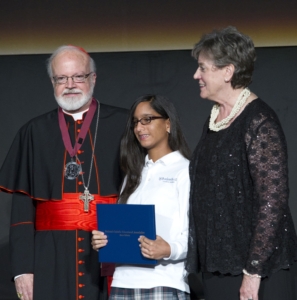 'The scholarship in my name was awarded to Emely Nunez, who is in the eighth grade at Pope John Paul II Catholic Academy. Congratulations Emely!' Pilot photo/CardinalSeansBlog.org

On Friday (9/28), I went to Our Lady Comforter of the Afflicted Parish in Waltham for the dedication of a new Marian garden they installed in front of the church. We had a rosary and a blessing in the garden. The schoolchildren were there, as well as many parishioners. We were so happy to hear Father Jim DiPerri's reports that the enrollment, Mass attendance, contributions to the parish and parish activities have all grown considerably in recent times. This is a great sign of encouragement. We are very grateful for the leadership of Father DiPerri and the effort parish leaders have exerted in that faith community to cause such wonderful growth.

The following day, Saturday (9/29), I went to St. Bernadette Parish in Randolph to be with them as they celebrated their 75th anniversary. The parish is a great example of the diversity in the archdiocese. There are large Vietnamese and Haitian communities in that parish, along with immigrants from many parts of the world. It was a beautiful celebration.

Monday (10/1), I was very pleased to be honored by the National Catholic Education Association at their annual Seton Awards Dinner in Washington D.C. ...I was very grateful to be honored by this fine organization which does so much to promote Catholic education throughout the country. However, for me, the most gratifying part of the evening was awarding the $1,000 scholarship that the NCEA gives in name of each recipient. The scholarship in my name was awarded to Emely Nunez, who is in the eighth grade at Pope John Paul II Catholic Academy. Congratulations Emely! I am so happy I could play a part in supporting your Catholic education.

Visit to the National Shrine

The NCEA dinner was held Monday evening and my return flight was not until Tuesday afternoon, so I took some time Tuesday morning (10/2) to visit the Basilica of the National Shrine of the Immaculate Conception. I was pleasantly surprised to run into Father Frank Silva and some priest friends of his who were visiting Washington. One of the most outstanding features of the Basilica are the many chapels, statutes, mosaics and other works of art that depict images of the Blessed Virgin and saints from all over the world.

One of the chapels I visited is the chapel of Our Lady of La Vang and the Vietnamese martyrs. The story of Our Lady of La Vang is a very interesting one. Catholicism was brought to Vietnam by European missionaries accompanying merchants in the early 1600's. The Vietnamese rulers tolerated it, and the faith spread. As happened in many other Asian missions, at a time of conflict the local rulers began to view the Church and the Catholic population as being in league with unwelcome European powers. As a result, in 1798 a persecution was ordered and many Catholics were martyred and their churches destroyed. To escape, the people fled to a remote area of the rain forest in La Vang. ...One day, a woman holding a child appeared to them dressed in traditional Vietnamese clothing and flanked by two Angels. She told the people to use the leaves of the tree as medicine for the sick and that people who came to pray at that place would have their prayers answered. The people immediately understood it was the Blessed Virgin and she was there to help them in their time of trial.