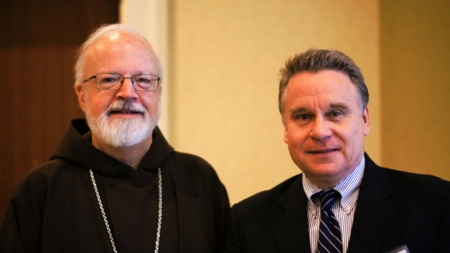 Cardinal O'Malley and U.S. Rep. Chris Smith, R-N.J., pictured at the Red Mass Luncheon sponsored by the Catholic Lawyers Guild of the Archdiocese of Boston, Sept. 28, 2012 at the Seaport Hotel in South Boston. Pilot photo/Kevin Blatt

Smith, who is co-chairman of the House Pro-Life Caucus, made his remarks to members of the Catholic Lawyers' Guild of the Archdiocese of Boston at the luncheon following their annual Red Mass. He spoke at South Boston's Seaport Hotel on Sept. 30.

In his remarks, Smith held up the character of St. Thomas More, patron of lawyers, who was beheaded in 1535 by King Henry VII after refusing to accept the king as Supreme Head of the Church of England. St. Thomas had clarity in his convictions. As a statesman, he sacrificed his very life to stand firm for his faith, he said.

"St. Thomas More once said he was the King's servant, but God's first. How many of us have so personalized and marginalized our faith in God -- at one time or another or as a habit -- so as to render it meaningless in the public square?" Smith asked.

He called on those gathered to put aside their preoccupation with being liked, honored, popular or elected. They should promote compassion for all without fear of the consequences.

"Today, there is a beguiling tendency in our society, especially in the political arena, to accept the euphemism -- choice, death with dignity -- over a difficult truth," he said.

"Abortion methods rip, tear and dismember, or chemically poison the fragile bodies of unborn children. There is nothing benign, compassionate or just about an act that utterly destroys the life of a baby and often physically, psychology or emotionally harms the woman," he said.

This year, Smith authored the District of Columbia Pain-Capable Unborn Child Protection Act and supported the national Sex-Selective Abortion Ban. He has a long history of opposing abortion; in 1984 he helped defund organizations that support forced abortions.

Smith's stance against human trafficking has recently become a pro-life issue. He worked on the Trafficking Victims Protection Act of 2000, which made grants available to groups like the U.S. Conference of Catholic Bishops, whose assistance for those victims was praised in U.S. Department of Health and Human Services (HHS) reviews.

Late last year, President Barack Obama's administration refused to renew the grant because the USCCB does not refer for abortions. Smith called the move an "unconscionable abuse of power."

President Obama has also demonstrated a "reckless disregard of religious liberty" by forcing people of conscience to subsidize contraceptives and abortifacient drugs through the HHS mandate.

After his remarks, Frances Hogan, clerk of the Lawyers Guild, praised Smith, "Thank you for all your hard work on behalf of dignity and life. It takes a lot of courage, and you seem to have a great deal of that."

"Would that we could populate our Congress with people like you. It would be a different country," he said.

Brody Hale, a first-year law student at Boston College, told The Pilot that he hopes to have the strong conviction displayed by St Thomas More and Smith. He knows that his faith will guide his actions in his future career and already understands the gravity that those decisions may have.

"Law is the glue that holds society together," he said. "Based on how it is used, it can have an incredibly powerful effect on the world."