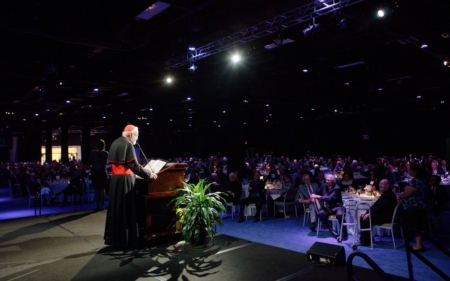 Cardinal Seán P. O'Malley delivers his remarks at the annual Celebration of the Priesthood dinner. "Some of the greatest people that I know have been Catholic priests," he said. "Our priests love their people with a shepherd's love," he said. Pilot photo/Gregory L. Tracy

BOSTON -- They came to pay tribute to the men whose faith has made a difference in their lives. They came to honor their priests.

From every corner of the archdiocese, over 1,300 people gathered at Boston's Seaport World Trade Center on Sept. 26 for the fourth annual Dinner in Celebration of the Priesthood.

As guests entered into the Trade Center's main hall, they were met with a display of historic vestments and liturgical vessels.

"Our chalices mean so much to us," Father Robert Reed, director of CatholicTV Network and this year's emcee said, holding his personal chalice, made from some of his grandparent's silver, up to the crowd.

"They are sacred reminders of our call," he said.

"We are, some of us, artists and athletes, musicians and canon lawyers," said Father Reed as childhood photos of some of the archdiocese's priests flashed on the hall's projection screens. "Every one of us is different, as you know, but all of us are gifted by the Holy Spirit to serve you.

"Tonight we salute and thank the men who enable us to live our Catholic faith," said Finnegan.

"I have been moved by how our priests have always shown a willingness of the heart," he said.

Finnegan spoke of how six years ago "our priests and their finances were drowning" with a clergy fund that was almost out of money and health care and housing costs for the clergy rising dramatically.

"We are proud to report that this year's dinner has raised $1.13 million for the clergy fund," he said, noting that the amount is an 11 percent increase over last year's dinner. The archdiocese later announced that additional contributions brought that figure to $1.2 million.

"We are now engaged for a brighter future and a stronger Church for our future," he said. "We are deeply grateful for your presence and your support."

Carter, who joined Finnegan on the stage, added "Tonight we stand united, as an archdiocese of men and women filled with the simplest and most powerful force: love. Love and appreciation for our priests -- our clergy."

"We have experienced many of the saddest and happiest moments in our lives with you by our sides," she said.

"You are there when we need you and now we stand proudly to be here for you -- to show our appreciation in deed and in donation," continued Carter.

"From Cardinal Seán to the retired priests at Regina Cleri to the most newly ordained, thank you for helping us lead lives of meaning as Catholics," she concluded.

In his remarks, D'Arrigo addressed the current situation of the clergy fund, as well as its future.

"Last year's fiscal results, although preliminary, will show a small surplus," he said, noting that this occurred "during one the most difficult economic times in recent history."

"We still have work to do," stressed D'Arrigo, adding that "for every 5 priests in active ministry, we have 4 retired priests."

"We need to start saving, to ensure the future for all the men who have walked the walk," he said. "They are there to serve God and to serve us."

Keynote speaker Don Rodman spoke of the impact priests have had on his life.

The businessman said that, despite the fact that he is Jewish, he realized his life "has been positively impacted by priests."

Beginning in 1979, when he was first invited to a Catholic Charities fundraising event, he has been a board member of the organization, he said.

"There is no individual that I am aware of who volunteers more hours" than a Catholic priest, he said. "The priesthood is an answering to a call -- not just an initial call to enter the seminary but a constant call."

"All of you who are here this evening are performing a mitzvah," he said, referring to the Hebrew term for a worthy deed. "How blessed am I to be here."

Cardinal O'Malley rounded out the evening's speakers. He spoke of own experiences -- of being an altar server as a young boy, of feeling the call to the priesthood as a young man.

"Some of the greatest people that I know have been Catholic priests," he said. "Our priests love their people with a shepherd's love."

"What a wonderful support for priests," Vicar General Msgr. Robert Deeley told The Pilot. "You can see how joyful and hopeful this evening is, as we come together and deal with the problem of clergy funds."

"It's wonderful when any group gets together to celebrate priests and the priesthood," echoed Bishop Robert Hennessey, auxiliary bishop of Boston. "The priests of the archdiocese of Boston feel loved and honored tonight."