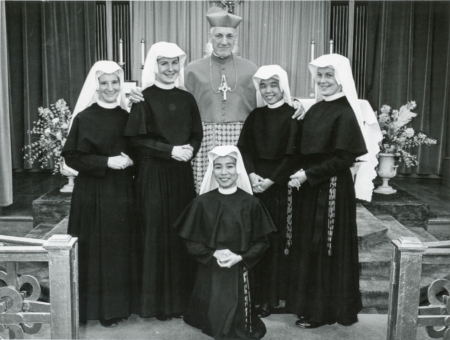 Archbishop Richard Cushing poses with novices of the Columban Sisters in the chapel of their new Hyde Park residence in 1948. Pilot file photo

In preparation for Mission Sunday, Oct. 21, The Pilot is pleased to recognize religious congregations whose primary work is mission activity.

In the long and magnificent history of the Columban Sisters, Boston holds a special place. The Columban Sisters trace their 1922 origins to Ireland, but Boston was destined to play a significant role in the congregation's future growth.

Their original County Clare novitiate presented cultural problems for novices from Australia, America, and Britain. So it was only a matter of time before the Sisters decided to set up a center in the United States. The Columban Sisters arrived in the United States on Christmas Eve 1930 and settled in Silver Creek, New York to establish its first novitiate. However, the congregation needed a more urban location that included colleges where the Sisters could prepare for careers in medicine, education, social services, and catechetical ministries needed in their missionary work. The Archdiocese of Boston had everything the Sisters could hope for, but they needed a special advocate who was friendly to mission activity and who could help them get started.

In 1948, Congregational Leader Mother Mary Vianney travelled to Boston to meet with Archbishop Richard Cushing where she found exactly the friend they were praying for. Archbishop Cushing advised her of a recently available Peabody estate in the Hyde Park section of Boston. The land contained a nine acre estate with an eight-bedroom house and a large heated stable, as well as a three-car garage, and an apple orchard. Best of all, Archbishop Cushing offered to pay for half of it. That did it. In October of 1948 the Sisters moved in. Two days later, Archbishop Cushing visited the novices on their newly acquired estate and blessed the house. Typical of the future cardinal, he ordered a new refrigerator and a freezer to be delivered right away. In return, the Columban Sisters quickly connected to their new archbishop and treated him to Irish soda bread with each visit.

Today, there are just under 200 Columban Sisters working in Chile, China, England, Ireland, Korea, Myanmar, Pakistan, Peru, the Philippines, Scotland, and the United States. Vocations continue, but in the missionary spirit of the day, the Columban Sisters maintain novitiates in South America and Myanmar.