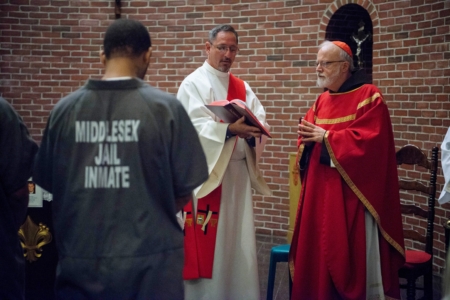 'I celebrated Mass for the inmates and then went to visit the cellblocks as well as those in solitary confinement.' Pilot photo/CardinalSeansBlog.org

Last Wednesday (9/19), I paid a visit to the Middlesex County Jail in Cambridge. Sheriff Peter Koutoujian is very interested in the different faith communities helping with ministry to the prisoners. The Catholic Church has a very active ministry there with Michael Charchaflian and Father Richard Deshaies. I celebrated Mass for the inmates and then went to visit the cellblocks as well as those in solitary confinement. We were very impressed by their very beautiful Chapel. My understanding is that the jail was built about 50 years ago. At that time, I suppose it was a very modern structure. The Protestant chaplain, who is the chief of chaplains at the jail, was there as well and was very welcoming to us. We were also very surprised at how overcrowded the jail is. There are plans to relocate for that reason. I believe they have a population that is approximately twice the facilities capacity. This is of course a great concern for the Sheriff.

On Thursday (9/20) I visited Anna Maria College in Paxton. I was asked to give a talk on evangelization and Catholic education at the convocation to begin the academic year. I was accompanied by Bishop McManus, the Bishop of Worcester. It was my first visit to the college and I was very impressed by the campus and their desire to promote the Catholic identity of the school. I met several of the Sisters of Saint Anne, the community that founded Anna Maria College in 1946. The college actually began in the Archdiocese of Boston, it was located in Marlborough, and then in 1952 went out to the Diocese of Worcester. To this day, the order still has a convent in Marlborough. During my visit they also very graciously bestowed me with an honorary doctorate of theology.

Each year we have a Mass to celebrate the anniversaries of the religious women in the archdiocese. This year, it was held at on Sunday (9/23) afternoon once again at St. Theresa of Avila Parish in West Roxbury. The parish is always very gracious to host us there. It was said that this year's jubilarians represent over 1,900 combined years of service to the Church. There was one sister celebrating her 75th anniversary of religious life.

Wednesday (9/26) I was visited by Bishop George Lungu of the Diocese of Chipata, Zambia who is here to speak in parishes about his diocese and raise support for the missions there. He was accompanied by Maureen Heil and Father Rodney Copp of our Pontifical Mission Societies. His diocese is, in a great part, a rural diocese and there is great poverty there. He is also trying to help the neighboring diocese in Mozambique that has very few priests and religious. The people of that diocese are of the same ethnic origin even though it is across the border in Mozambique. He presented me with a shawl, which is commemorative of the anniversary of his diocese. It includes pictures of the different bishops and historical representations of the diocese. He explained that in his country, particularly women, would wrap this around themselves when they went to Mass.