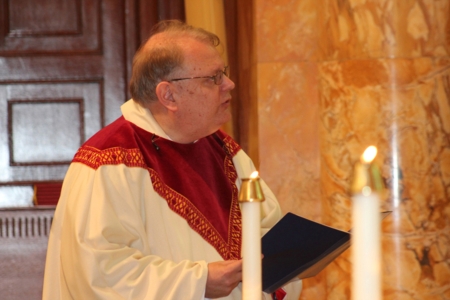 At the Mass in the seminary chapel, the rector and faculty members made the profession of faith and took the Oath of Fidelity to the Church required of them by Canon Law.

Also as part of the ceremony, Worcester Bishop Robert J. McManus presented Msgr. Moroney, a priest of the Diocese of Worcester, with the June 28 decree signed by Vatican Secretary of State Cardinal Tarcisio Bertone that declared him a Prelate of Honor, the second level of monsignor.

Cardinal Seán P. O'Malley expressed gratitude to Bishop McManus and the Worcester Diocese for sharing Msgr. Moroney with the seminary.

The cardinal said the rector enjoys a world-wide prestigious reputation as consultor to the Vatican Congregation for Divine Worship and the Discipline of the Sacraments, and executive secretary of its Vox Clara committee of bishops from the English-speaking world. However, the cardinal said, what really impresses him about Msgr. Moroney is his joy and his deep love of the priesthood.

In his homily, Msgr. Moroney focused on the figure of the shepherd.

He said he and his faculty are called to help men discern God's call and form them as shepherds.

"Some of you began God's holy work of forming priests...in other holy houses...where mothers and fathers taught sons how to make the sign of the cross...how to love as Jesus first loved them," he said.

"Here, men learn...to live as holy priests. They learn to preach, to administer the sacraments, and to set the world on fire with divine faith...to draw all people to Christ."

Msgr. Moroney quoted Bishop John Wright, first bishop of Worcester, previously auxiliary bishop of Boston: The priest is the sort of man in whom Christ is "present...as he is present in no saint...and in no angel...a priest (whose) supreme privilege, as well as his terrifying responsibility, is to be, in a sense, Christ himself."

"As the pastor of this holy house, I will accomplish my task only with the help of God," Msgr. Moroney said. "I will seek to be gentle and humble and faithful and true. Like the Good Shepherd...I will seek to know my sheep and invite them to know me. I will seek out the lost and bind up their wounds and carry them home. I will lay down my life...and protect this house from thieves and marauders of body or mind. I will lead this flock of shepherds to good pastures... And I will do it all in union with the bishops and our Holy Father," he said.

After the homily, Msgr. Moroney made the profession of faith and, using a bible that belonged to the first bishop of Boston, Cardinal Jean Lefevre de Cheverus, took the oath to carry out his duties to the Church. He and Cardinal O'Malley signed his oath. The process was repeated with the faculty.

Among those Msgr. Moroney regonized at Mass were Monsieur Pierre-Marie Dumont, founder and publisher of Magnificat magazine, who he said flew in from Paris for the occasion.

He also mentioned his sister, Deborah Galanos, her son, Daniel, and cousins, Sisters Mary and Ann Horgan, Sisters of Providence, who were present. He added that his parents were watching the Mass through CatholicTV.

"We know he's worked so hard and we're so extremely proud," his sister said after Mass. "And he's been such a blessing, not just to the Church, but to our family."

"It was a beautiful ceremony," said Sister Mary. "I think he'll do a wonderful job with the young men."

"Bishop Kennedy has done a fabulous job," said seminary trustee Craig Gibson of Msgr. Moroney's predecessor, Bishop Arthur L. Kennedy, now the archdiocese's episcopal vicar for the New Evangelization. "The seminary is, thanks to him, almost full." He said Msgr. Moroney, who has "abundant gifts," "is a star in the area of sacred liturgy" and is kind and gentle, was an excellent choice.

"He's got a clear vision on growing the seminary, doing so with the bishops around New England," he said. "He's a terrific guy. We're very excited."