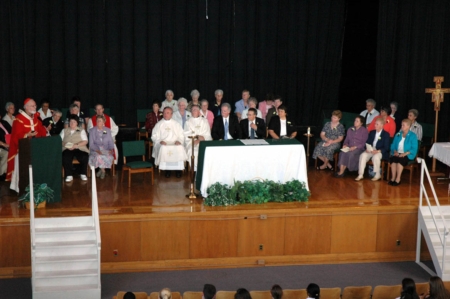 'On Friday (9/14), I celebrated the Mass at Archbishop Williams High School in Braintree to mark the 200th anniversary of the Sisters of Charity of Nazareth.' Pilot photo/CardinalSeansBlog.org

On Friday (9/14), I celebrated the Mass at Archbishop Williams High School in Braintree to mark the 200th anniversary of the Sisters of Charity of Nazareth. The sisters founded the school in 1949 and there have been over 160 sisters who have served at the school over the years, providing an invaluable contribution to the archdiocese. Many sisters who had been teachers, or were themselves graduates of the high school, were present for the Mass. Today, the school is flourishing and the people still feel a great debt of gratitude to the Sisters of Charity for initiating this marvelous ministry that continues so well at Archbishop Williams High School.

That afternoon we were very pleased to welcome Msgr. Leo Maasburg to the cathedral for a talk on the life of Blessed Mother Teresa. Msgr. Maasburg is the head of the Society for the Propagation of the Faith for the country of Austria. For many years, he worked very closely with Mother Teresa as her spiritual advisor and translator and he traveled with her to many countries in the world to assist her. He has written an inspiring book of his reflections on those experiences with Mother Teresa. He gave a wonderful talk because not only does he share many of the anecdotes of moments with Mother Teresa, but he also uses those experiences to explain the theology of Mother Teresa. We are very grateful to Alexis Walkenstein for having made arrangements for Msgr. Maasburg to come to Boston.

On Monday (9/17) I participated in a webinar on physician assisted suicide with the priests and parish and school leaders of the archdiocese. This was the first time that we have communicated with parishes and schools in this way and I anticipate that, going forward, this will be a very useful vehicle, as we take advantage of the possibilities of this new technology that allows people to register their questions and get an immediate response. We discussed several concerns with the proposed law. We began with reasons why those who are concerned with the dignity of life and advocates for those with disabilities would be likely to oppose this ballot initiative. Second, we addressed the many flaws in the way the proposed law is written. And thirdly, we spoke about concerns that this is not an appropriate way to make legislation on such a complex issue. Rather than having the legislature study this issue and hold debates and hearings, many voters are likely to make their decision based on sound bites and snippets of information they have heard from both sides.

That evening (9/18), I attended a reception for the Catholic Extension, which supports home missions within the territory of United States. This would include places like Guam, the Virgin Islands, Puerto Rico as well as dioceses throughout the Midwest and West continental United States. The gathering was held to help peoplve in this area learn more about their work. The Catholic Extension works in dioceses that are small, rural or poor. They build churches, help fund seminarians, and support Catholic schools and many other programs. As a former bishop of a missionary diocese, I have experienced firsthand the wonderful work they do.

When I became Bishop of the Virgin Islands, our entire diocesan budget was $30,000 a year! Needless to say, there were no salaries. We were lucky if it covered the food and other essentials. With that I had to support myself, the retired Bishop, the Sister who was the Chancellor, two seminarians -- and everything else we did in the diocese. The support of Catholic Extension was invaluable.