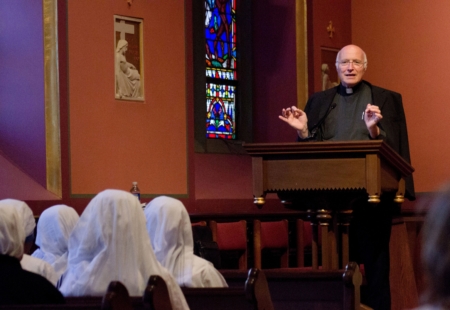 Msgr. Leo Maasburg, spiritual adviser and confessor to Blessed Teresa of Kolkata, speaks about her life at the Cathedral of the Holy Cross, Sept. 16. Pilot photo/Christopher S. Pineo

SOUTH END -- Blessed Teresa of Kolkata felt a calling to bring people to God by simply loving them, and her own longing to be close to God through Jesus Christ was like a thirst, said an Austrian priest who for many years was her spiritual adviser.

Msgr. Leo Maasburg, in a talk Sept. 16 at the Cathedral of the Holy Cross in Boston, described his experiences traveling and working day-to-day with Mother Teresa in her ministries.

After beginning a friendship with her in the 1970s, he accompanied her as spiritual adviser, translator and confessor on the travels between 1984 and 1991 where she came face-to-face with a Marxist dictator and his armed fighters in Nicaragua, cared for children in Soviet states, and ministered to the dying in Kolkata, India.

Later, in an interview with The Pilot, he said he took care in his 2011 book about Mother Teresa and in his talk to demonstrate the personal humanity of the woman sometimes called "the most powerful woman in the world."

"The talk was an attempt to depict Mother Teresa from a side which she was not so well known in the media, because the media -- maybe rightly -- focused on her social aspects, on the way she treated the poor, her engagement with the poor and what she did," he said.

"I wanted to center on the mystical experience she had, explaining in the first place her personality, which was Albanian. She was ethnically Albanian, and her personality was that of a very strong, fiery person. She was not a softy-softy or a goody-goody," he said, adding that she was also witty and quick in a humorous way.

Once asked what the Church could do better, she answered, "We could change you and me."

He said she asked him to run a retreat for sisters of her Missionaries of Charity as a recently ordained priest. He told her he had never run a retreat and asked what he should speak to the sisters about.

"Talk about Jesus. What else?" she replied.

The priest also spoke about Mother Teresa's views on abortion.

He said she saw the moral gray area created by allowing abortion as a threat to the world on a fundamental level.

"She said if we are allowed to kill the baby in our womb, who will keep us from killing each other? That is true. That is such a realistic view of human nature. Human nature is that way," he said.

He compared Mother Teresa's longing to be close to God through Jesus Christ with a thirst, emphasizing the point with two of the savior's final words on the cross "I thirst."

"She had such a deep experience of the 'I thirst,' of the thirst of Christ for love and for souls. But, love is always free, you cannot force someone to love you," said Msgr. Maasburg, who also gave a talk about her in New York Sept. 17.

He said he observed change in Mother Teresa. He said she had thought she needed to convert people but later felt a calling simply to love them. She said God would convert them through love.

"Love of course is the biggest magnet to poor people to the Lord, without forcing them. That's what she did her whole life long. She loved them and her love for them practically converted them, or gave them the chance to be converted," Msgr. Maasburg said.

He said her day-to-day life always included a kind of internal dialogue with Christ, infusing her Catholic work with faith in Christ's real presence in the world.

"For her, there was the same Christ present in the Eucharist as in the poorest of the poor, and you could love Christ only if you loved them," he said.

Msgr. Maasburg said as she struggled with her personal connection to God she experienced not atheism, but profound faith. He used an analogy created by St. John of the Cross to explain her ordeal. A collection of letters she had written about a "crisis of faith" she went through was published in 2007.

"Developing in a spiritual life is like coming out of the darkness, the darkness of sin. When you get in the half-light of the morning dawn of sanctity, then you feel two sides. You feel on one side you are sinful, and on the other side are already cleansed through the love of Christ," he said.

He said she moved into a kind of union with God through her faith, which changed her perspective.

"When you unite with God, there is a next stage where you exit into the open. You see. You are like the sun. When from the dark or half-dark you exit, you enter the sun then you do not see anything anymore," he said. "The eyes are not capable of taking that in."