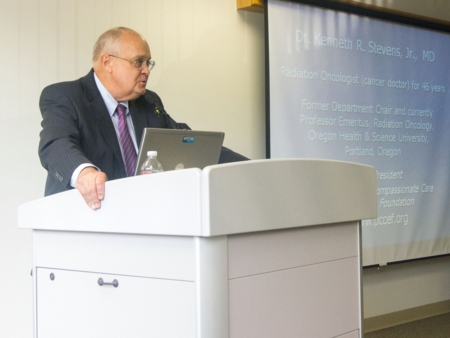 BRAINTREE -- Twelve years ago, a patient visited Dr. Kenneth Stevens after being diagnosed with a form of cancer that would kill her in six months without treatment, seeking drugs to end her life. Over a course of the next few weeks Dr. Stevens spoke to her about other options.

"If my doctor had believed in assisted suicide, I would be dead. I thank him and all my doctors for helping me to choose 'life with dignity.' Assisted suicide should not be legal. I hope Massachusetts does not make this terrible mistake," she wrote in a 2011 letter to the Boston Globe.

At his presentation "The Reality of Physician Assisted Suicide in Oregon and what it means to Massachusetts" at the Pastoral Center Sept. 7, Dr. Stevens, vice president of Physicians for Compassionate Care Education Foundation (PCCEF), told this story to emphasize his point that the law proposed under a November ballot question in Massachusetts damages relationships between doctors and patients, detracts from the advance of medical science, and advances under a plethora of poorly defined terms coupled with misleading messages.

As an oncologist with 46 years of experience, who practices and teaches at Oregon Health and Science University in Oregon, Dr. Stevens built his case from the point of view of a board certified physician licensed in radiology who has treated many patients throughout the years facing grim diagnoses.

In his talk, he spoke on the importance of clear definitions as the discourse on the proposed law unfolds in Massachusetts.

"The legalization of physician assisted suicide does not give any new rights to the patient. They say, 'I want a right to die.' Well, you are going to die. You already have that right. Its purpose is to legally protect doctors who write prescriptions for lethal drugs," he said.

He said clearly defining the issue should remain at the center of the effort to fight physician assisted suicide.

"It is important to use proper language. It is physician-assisted suicide. That's what it is," he said.

He said attempts to legitimize or legalize physician assisted suicide are based in the language of driving an agenda not promoting the development of healthcare or patient needs.

"The legalization of assisted suicide in Oregon was not the result of a scientific medical advance," he said.

Instead, he said, it was passed as a result of a campaign led by what was once called the Hemlock Society, which has taken up the name Compassion and Choices after merging with other organizations in recent years.

"They are leading the campaign here. They use euphemisms to distort the truth. They use double-speak," he said.

He said traditional groups in the field of medicine make clear distinctions regarding the issue of physician assisted suicide.

"The American Medical Association code of ethics also says that 'allowing physicians to participate in assisted suicide would cause more harm than good. Physician assisted suicide is fundamentally incompatible with the physician's role as healer,'" he said, quoting the AMA's Code of Medical Ethics.

He said physician assisted suicide laws in Oregon have breached the trust between doctors and patients when other factors become involved.

"Assisted suicide has turned medicine upside down. There can be no safe haven, no safe harbor for a patient when the doctor may kill them. We don't care for patients by killing them," he said.

After forming in Oregon approved physician assisted suicide in 1994, PCCEF took on the task of affirming the value of human life under the understanding that physicians work to heal illness, alleviate suffering, and provide comfort for the sick and dying. Their website says members work to uphold time-honored values of the medical profession, including the value of human life and care for patients.

Dr. Stevens said that beyond uprooting the traditional values regarding life, the laws can degrade care for patients.

"Assisted suicide leads to the dumbing down of medicine," he said.

He said no skill is required to write a prescription for life ending drugs, taking the focus off of the doctor's role in determining a solution to sometimes simple medical issues.

In his role as an educator he also must anticipate the needs of students.

"As we interview prospective students we don't usually ask, 'Do you want to go into medicine to kill people?' That's not what we ask," he said.

He said implementation of these laws can create a niche for physicians who make lethal treatments a kind of specialty.

He also addressed the inherent danger of laws supporting physician assisted suicide wherein the expense of treatment becomes a factor in determining which care should be available to which patients. He pointed out that the elderly, infirm and disabled come under threat in this way.

"For 2,500 years physicians have withstood the allure of promoting death. We have cared for the weak and the outcast when others have turned away," Dr. Stevens said.

He presented the case of a woman denied experimental chemotherapy treatment under her health plan, but approved for assisted suicide.

Dr. Stevens told The Pilot after his talk that the case in favor of physician assisted suicide downplays clear definitions, eschews medical science, and damages doctor patient relationships in pursuit of an ideology.

"It is an ideology that a patient should be able to take their own life with a doctor's assistance," he said.

"The legalization of assisted suicide is anti-science. It is against medical care. It's against scientific medicine," Dr. Stevens said.

"We all have to be educated. We all have to make sure we understand the full import of what is happening," said Bishop John A. Dooher, who also attended the talk.

"We all have to begin to educate ourselves about not just the simple issues, but all the issues around it," he said.