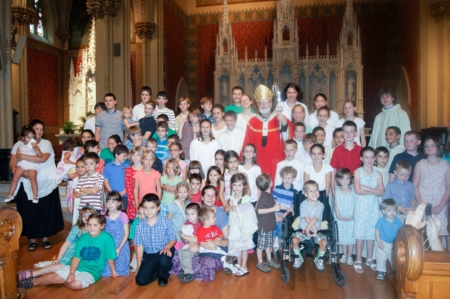 Then later that day (9/7), I was happy to celebrate a Mass with the Catholic homeschool families in the archdiocese. Parents are the primary educators of their children, and this is very obvious in the cases of these Catholic families that are involved in homeschooling. Pilot photo/CardinalSeansBlog.org

This week I want to begin by expressing our condolences to the families of those who died earlier this week (9/11) in the attack on the U.S. Consulate in Benghazi, Libya: Ambassador J. Christopher Stevens, Tyrone Woods, Sean Smith, and we remember in a special way Glenn Doherty, who was originally from Winchester here in the Archdiocese of Boston.

We pray for the repose of their souls and for the consolation of all those who are mourning the tragic death of our fellow citizens. I also ask you to join me in praying for peace in the Middle East and for an end to all types of extremism that promote a poisonous atmosphere within which the taking of human life is condoned.

Friday (9/7), I was pleased to welcome Dr. Kenneth Stevens to the Pastoral Center for a talk on the subject of physician assisted suicide. He shared with us his experiences of this type of legislation in his home state of Oregon. He was an eloquent exponent of why the physician assisted suicide ballot initiative is flawed legislation and should be rejected by the people of Massachusetts.

Then later that day, I was happy to celebrate a Mass with the Catholic homeschool families in the archdiocese. Parents are the primary educators of their children, and this is very obvious in the cases of these Catholic families that are involved in homeschooling. In my remarks, I thanked the families for joining us and told them that the Church wants to be present to them. Homeschooling can be very challenging, and yet youngsters that are homeschooled typically test very highly compared to similar students in public and other private education settings. It is also an opportunity to give the kind of faith formation that is very solid. This option for families is a blessing for the overall community and I was happy to encourage and support them.

Then on Sunday (9/9), I attended two days of meetings in Washington D.C. with the U.S. Conference of Catholic Bishops. We had meetings of the Pro-Life Committee and the Clergy, Consecrated Life and Vocations Committee.

While I was there, I recorded a television interview with Raymond Arroyo of EWTN for his program "The World Over." The interview took place in a studio that EWTN rents from NBC, and it is absolutely fabulous. When I walked into the studio, I saw what I presumed to be a picture of the Capitol Building behind the desk. However, when I got up to it I realized: This is a window and this is the view!

The purpose of the program was to educate people on the issue of physician assisted suicide and to encourage people to become involved. I think many realize that the outcome of this ballot question in Massachusetts is going to have profound effects on the rest of New England and, eventually, on the rest of the country. So, this is an issue of national importance.