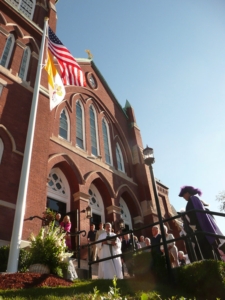 ANDOVER -- Father Peter G. Gori, OSA, pastor of St. Augustine Parish gathered with parishioners, local police officers and veterans to dedicate a new flagpole and plaque in front of the parish on the eve of Sept. 11, just after the 8 a.m. Mass.

Parishioners William Hart and his wife Alice donated the "Liberty Flagpole" to the parish.

Claude Gallant donated the U.S. flag and a flag of the Holy See, which flew at full mast as Knights of Columbus and American Legion members observed the blessing by Father Gori.

"It is being dedicated today ... today being the eve of Sept. 11, because we honor every citizen who has striven to be both a good Catholic and a good American," he said during the homily at the Mass before the dedication.

The flagpole was dedicated to the men and women of St. Augustine Parish who served in the U.S. Armed Forces throughout the years.

"My greatest passion has always been to serve God and my country," Gallant said.

A veteran, Gallant served in the Air Force during the Korean War.

Deployed in England, he spent time at Prinknash Abbey in Gloucestershire. He said during his stay with the Benedictine Monks at the abbey he slept on the floor, shared the food the monks prepared by hand, and only heard spoken words when the monks read from the Bible before meals.

The plaque at the base of the flagpole bears a portion of the preamble of The Declaration of Independence.

"The plaque reminds us that we receive the liberties from our creator and our thoughts are that we should be reminded of that. No one or no group can interfere with the rights that we have," William Hart said.

"I think many pastors have the experience about once a year or so that somebody comes along and asks the question, 'Why is it we do not have the American flag displayed in our sanctuary like we used to when I was a child?'" Father Gori said.

According to the U.S. Conference of Catholic Bishops, there is no formal rule on the display of flags in Catholic churches. However, in the past the Bishops' Committee on the Liturgy has suggested that flags be displayed outside the sanctuary itself.

On Flag Day in June, Father Gori published in the parish bulletin an explanation, and invited parishioners to donate a pole and flags.

Alice Hart said her husband rushed to seize the opportunity.

"My husband was the one that first heard about it and read about it in the parish bulletin and he couldn't get to Father Peter (Gori), our pastor, fast enough to say he would dedicate the liberty pole," she said.