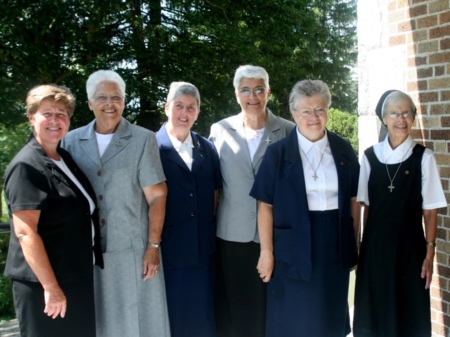 Chambers has been affiliated with Catholic Charities serving in various capacities since 1990.

After volunteering at the "Our Daily Bread" lunchtime program, Chambers was later hired to supervise the program. Chambers also led the Intensive Family Intervention program for Haitian Families at Catholic Charities and served as the Director of Community Services for food pantries in Somerville, Dorchester, El Centro, Natick and Brockton. Chambers was part of the Catholic Charities' team that worked with families who lost loved ones in the terrorist attacks on Sept. 11, 2001 and she continues to work with the Massachusetts 9/11 Fund. Chambers has been the administrator of Sunset Point Camp in Hull for 17 years and will continue that role in her new position.

The school said students will use the iPads for class work and homework as well as to communicate, collaborate, read assignments, take notes, organize their schedules, and do research.

Students said they look forward to the new school year and using their new tools.

"I know the power of technology and I'm looking forward to the new learning experience at St. Catherine's," seventh-grader Oliver Wales said.

This fall, Regis College becomes one of just three institutions in Massachusetts to offer a Master's of Science in Applied Behavior Analysis (ABA) program.

People on the spectrum of autism disorders have difficulty initiating social interactions or indicating their wants and needs. Regis officials said the program works to identify why certain inappropriate behavior occurs, develop individualized treatments, and change the autistic person's environment to promote new skills and decrease problem behavior. The first course will be offered in January 2013.

Sisters of the Presentation of Mary unify U.S. provinces

The Sisters of the Presentation of Mary celebrated the formal rite of unification of its two American Provinces as well as the installation of the new leadership team last month.

The Manchester and Methuen Provinces will now be known as the United States Province, with administrative offices located at 209 Lawrence Street in Methuen.

Founded by Blessed Anne-Marie Rivier in Thueyts, France in 1796, the Congregation includes some 1,200 sisters, 2,100 lay associates, several lay consecrated persons serving in 20 different countries. They first came to the United States in the late 1800s, in response to the spiritual and educational needs of the many families immigrating to New England from Canada.

The sisters continue to serve in several parishes and schools as well as in other outreach ministries Massachusetts as well as in Maine, New Hampshire and Rhode Island.

Father Jonathan DeFelice, O.S.B., president of St. Anselm College in Goffstown, N.H. has announced that he will retire at the end of the academic year in June of 2013, after leading the college since 1989.

As the longest serving college president in New Hampshire, Father DeFelice had a lasting impact on St. Anselm and on higher education in the state.

Under his leadership, St. Anselm College incorporated service into college curricula, launched the New Hampshire Institute of Politics, and enhanced its reputation as a nationally ranked liberal arts college.

During his tenure as president, exercising firm convictions about the value of a liberal arts education, Father DeFelice helped St. Anselm College deepen its commitment to excellence in the Catholic, Benedictine tradition, emphasizing academic and extracurricular pursuits in balance with spiritual growth. He expanded the faculty and introduced a number of new majors from fine arts to environmental science and communication.

Sarah Kamp, a senior at Sacred Heart High in Kingston, maintained a 3.83 GPA and is a member of the National Honor Society. She has volunteered weekly at Jordan Hospital since her freshman year, and plans to seek a career in nursing.

Samantha Leary, an incoming freshman at Notre Dame Academy in Hingham, volunteered at the church's vacation Bible school for the past two summers, and serves as a lector and altar server at the church.