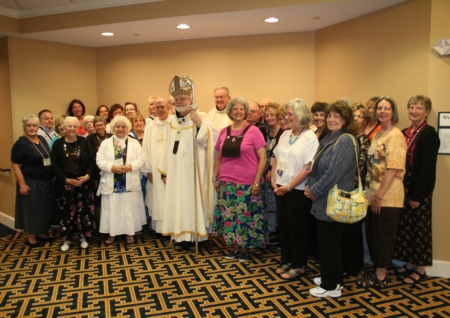 On Saturday (Aug. 18), I participated in the National Congress of the Secular Order of Carmelites. It was held in Wakefield but attended by people from all over the country. Loretta Gallagher and the other local organizers did a wonderful job. Pilot photo/CardinalSeansBlog.org

I want to begin this week with a note of thanks to Barbara Thorp, the director of our Office for Pastoral Support and Child Protection, who after three decades of extraordinary service to the Archdiocese of Boston is moving on. We are very sad to see her go but very grateful for the work she has done.

I first met Barbara when she was the director of the Pro-Life Office, where she was very effective. And, of course, all of her work in outreach and assistance to victims and their families has been extraordinary. I recall the wonderful help she provided at the time of Pope Benedict XVI's visit to the U.S., facilitating the meeting between the Holy Father and survivors and, more recently, her accompanying me to Ireland during my visitation to the Archdiocese of Dublin. These were extraordinary services and we are very, very grateful for them. Our prayers and gratitude accompany her as she concludes her tenure as director of the office.

The wonderful work that Barbara Thorp has done has provided us with a solid basis and the archdiocese is firmly committed to continuing this vital mission.

On Saturday (Aug. 18), I participated in the National Congress of the Secular Order of Carmelites. It was held in Wakefield but attended by people from all over the country.

Many of the Carmelite Friars were there, including the provincial Father John Sullivan.

Also, among the delegates at the congress was one of my former parishioners from the Virgin Islands, Rita Schuster. I was very surprised and happy to see her there.

Later that day, I joined the many people who came to attend the wake of Johnny Pesky in Lynn.

I was very touched when his son told me, "My father had your picture on the refrigerator door"! (I had forgotten a couple of years ago we had our picture taken together.)

Obviously, he made a great contribution to the community here in Boston, which has such a glorious sports tradition and a love for baseball.

He was a very important figure and a faithful Catholic. We commend him to God's love and mercy.

Much of the rest of the week I spent at the annual summer retreat of the bishops of the New England Region at St. Edmund's Retreat on Enders Island in Connecticut.

This year, we were very blessed to have Cardinal Thomas Collins lead the retreat for us. He is a Scripture scholar and I consider him to be one of our best preachers. The theme of his retreat was the Psalms, particularly the Psalms of the Divine Office. We are so grateful for his generosity and taking the time to join us. It was a very beautiful retreat and all of the bishops were just thrilled with his presence there.