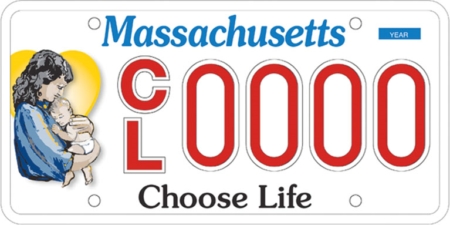 Now is a critical time for people to order the Choose Life license plates, according to Merry Nordeen, who spearheaded the effort to bring these specialty plates to the Commonwealth.

While the June deadline has passed, the Massachusetts Registry of Motor Vehicles has informed Nordeen that the $100,000 bond put up by a private donor will be returned in its entirety if the goal of 3,000 plates is met. Until then, the bond is on hold and so is the money raised by the plates.

The foundation for the Choose Life license plates has distributed some of the more than $100,000 the plates have raised. Now, the board is waiting to see that the $100,000 bond is released before spending the nearly $100,000 they have accumulated in case that money is required to replace the bond.

"We're doing it one plate at a time. Every plate counts. If anyone is considering getting the plate, now would be the time to help us reach our goal," Nordeen said. "It's very exciting to be this close, and we're just looking forward to being able to start giving our grants out again once we know that we've reached the goal."

The nearly $100,000 on hold by Choose Life could go to crisis pregnancy centers and other Pro-Life causes. In the past, the organization has granted money to pregnancy resource centers and provided funds to their counselors and directors to attend training sessions.

"The centers can't believe that there's money to be had. They struggle a lot. It's been really great to do this for them," she said.

Anne Fox, president of MCFL, said that MCFL is grateful for the assistance they have received from Choose Life.

Fox said she is "delighted" to see the RMV extend the deadline for the plates.

In a June e-mail to supporters, Fox urged, "If you don't have a plate, please, please get one. If you do have a plate, thank you. Now, please inspire someone else to get a plate."

"There has never been an easier way to do real good!" she added.

The Choose Life plate, one of 18 Massachusetts plates that benefit charities, features a mother cradling her infant and the words "Choose Life." The cost of the plates is $90 every two years. The first $50 is the normal registry charge. The remaining $40 will cover a $12 manufacturing fee the first year and the rest funds Pro-Life causes. In subsequent years, the entire $40 goes directly to Choose Life.

A simple trip to the registry or registry's website is all it takes, and there is no need to wait until your plates are due for registration.

The first Choose Life license plates were introduced in Florida 11 years ago. When Merry Nordeen heard about them, she thought, "That's a great idea. I want that for my car." But no one in Massachusetts was working to bring the plates to the Commonwealth. So Nordeen decided to give it a try. She started a corporation, secured non-profit status and began collecting registrations. Seven years later, the plates made it on the road, which was just two years ago this July.

There are 27 states that offer the plates, which have raised over $14 million nationally. In two more states, they have been approved but are not yet available. Efforts continue in 14 states, and in just seven there is no effort underway.

Because of the money raised by the plates, supporters say they are significantly different than a Pro-Life bumper sticker.

On their website, the Massachusetts Family Institute says, "The Choose Life License Plate is a wonderful way to raise public awareness and much needed funding to support the positive choices of life, adoption and safe havens for unwanted pregnancies and newborns.

Anne Fox praised the solidarity the plates bring to people who are Pro-Life. So far, she has not heard any reports of plate owners receiving negative feedback.

"It's just been a very positive experience for people," she said, adding about the plates, "Seeing them on the road, I just feel great."

Nordeen agreed, "Whenever I do see one on the road in the state of Massachusetts, I'm so happy because you feel like it's extended family, like-minded people who have put forth the effort to get the plate."

For more information about the Choose Life plates, visit www.machoose-life.org.