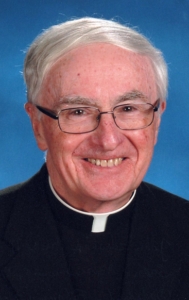 "My mother told me that, the day of my First Communion, I told her I wanted to be a priest," recounted Father John Farrell, recently retired pastor of Our Lady of the Assumption Parish in Lyvnnfield.

Father Farrell, known to many simply as "Father Jack," was granted senior priest/ retirement status on Aug. 1, after 50 years ministering to the people of the archdiocese.

Born in Somerville in 1936, he attended the parish grammar school at St. Ann's, the parish he and his family called home. During the summers, he and his five siblings often visited his grandparents' farm in Nova Scotia, a place he still holds dear.

"My family was active in our parish," he said. "And in Nova Scotia, the church is always at the center of everything. In fact, it is hard to divide the church and the wider community."

So, in a family that had fostered several vocations to the priesthood and religious life, it was perhaps not surprising that Father Farrell also felt called to serve the Church.

Immediately after graduating from Boston College High School, Father Farrell enrolled at St. John's Seminary, and was ordained by Cardinal Richard Cushing at the Cathedral of the Holy Cross on Feb. 2, 1962.

His first assignment was at St. Joseph Parish in Wakefield, where he remained for 18 months.

In 1963, Father Farrell was asked to become part of the faculty at the now-closed Cardinal O'Connell Minor Seminary in Jamaica Plain. For 7 years, he taught Greek and Latin to the students at the minor seminary.

In 1970, Father Farrell entered The Catholic University of America in Washington, D.C. to further his studies. Upon his return to the archdiocese, he taught patristic theology at St. John's Seminary from 1973 to 1990.

"It was wonderful teaching, mentoring and working with all those young men who had aspirations to serve the people of the archdiocese," he said.

For Father Farrell, nothing was more rewarding than attending the ordinations during those years, he said.

"Seeing these men, seeing their dreams coming to fruition -- and that the faculty was part of the discernment process -- it was always wonderful," he said.

Seeking to return to parish ministry, in 1990 Father Farrell was named pastor of Our Lady of the Assumption in Lynnfield, the parish he would shepherd until his retirement this year.

"That was an awesome experience for me," he said. "Sharing lives with people and doing it with the basis of faith was wonderful."

In 1996, he was appointed Vicar Forane for the Gloucester Vicariate, where he met monthly with the 19 priests of the area, many of whom were former students of his from St. John's Seminary.

"Getting to work with the priests who were students of mine always brings a smile to my face," he said.

Father Farrell is currently living in Dracut. Although he is unsure what his future will hold, he is looking forward to helping out wherever he is needed.

"I have a passion for justice, which means I always strive to be compassionate to others," he said. "If the Lord is risen, the glory of God is in our hearts, and we do our best to keep the shadows at bay."