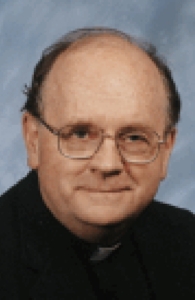 As a young adult, Father Kennedy began to feel God's call to the priesthood due in part to a near death experience he suffered when his appendix ruptured.

"This near death experience made me acutely aware of my mortality," he said.

During his recovery that Father Kennedy began to "contemplate the meaning of my life," he recounted, which ultimately led him to enter St. John's Seminary in Brighton.

On May, 26 1966, he was ordained at the Cathedral of the Holy Cross by Cardinal Richard Cushing. His first assignment was at St. Margaret Mary Parish in Westwood, where he spent five years.

In 1971 he began a position in-residence at the Pine Street Inn in Boston's South End, where for five years he worked in the Urban-Suburban Alcoholic Ministry.

"Living there, I began to encounter people who literally were feeding the poor, just like in Matthew 25," he said referring to the chapter of the Gospel in which Jesus says, "When I was hungry you gave me to eat. When I was thirsty, you gave me to drink..."

In 2004, Father Kennedy received his final assignment as pastor of St. Monica's, where he remained until July 31.

"Most of my ministry centered around the city, which was very rewarding" he said, noting that the issue of feeding the poor has always been very dear to him.

"I think the whole concept of how to feed the hungry has radically changed in the past 40 years," he said. "It really is a public health issue now."

Currently residing in East Boston, Father Kennedy said he is "prepared to see what God is setting out ahead of me."