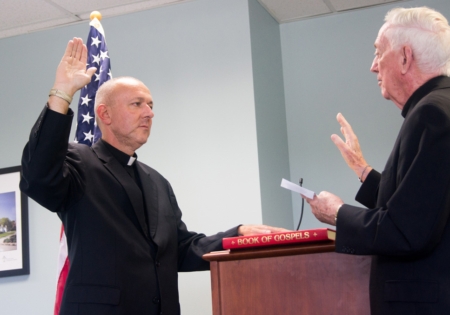 At the 29th Annual National Night Out in Boston, Father Jack Ahern and Father Richard C. "Doc" Conway, who serve at three Dorchester parishes, received Crime Fighter of The Year Awards for their work with Boston youth.

St. John's Seminary Class of 1962 recently celebrated its 50th anniversary with a reception and grand reunion banquet in the refectory at the seminary with a record attendance of 38 classmates.

"While this gala event had special significance, particularly since it was a return to our venue as seminarians, the class has taken pride in maintaining a close bond with each other over the years by having regular reunions hosted by individual classmates at their respective parishes in and around the Boston area," class secretary Donald Morency said.

The class also launched what could be the first class website in the history of St. John's Seminary. The site, www.stjohnsem62.com, was designed and developed as a nostalgic vehicle to recall memories of the past and to share current news, activities and thoughts as the class moves through the years.

"It has been well received and we look forward to the site serving as another means to keep in touch with each other," Morency said.

At the Pastoral Center in Braintree, Msgr. John McDonough administered the oath of office to Father Thomas S. Foley, swearing him in as a chaplain with the rank of captain in the United States Air Force on Aug. 13.

Father Foley will report to a base in Mobile, Alabama by Aug. 27 for a month of training before heading to his three-year assignment at Ellsworth Air Force Base in South Dakota.

At the swearing-in he said he anticipates a deployment to Afghanistan during his service to the Archdiocese for the Military Services.

Cardinal Seán P. O'Malley will be among the recipients of the National Catholic Educational Association's St. Elizabeth Ann Seton Award for his efforts to renew and revitalize Catholic education in the Archdiocese of Boston. The award will be presented during the 22nd annual Seton Awards ceremony Oct. 1 at the Ronald Reagan International Trade Center in Washington, D.C.

The Seton Award is NCEA's highest honor, given in recognition of significant contributions to Catholic education. The award is named in honor of St. Elizabeth Ann Seton, the first native-born American saint.

In announcing the award, the NCEA cited Cardinal O'Malley's establishment, in 2005, of the 2010 Initiative, a committee of educators, clergy, civic and business leaders who developed a strategic plan based on study and research. The cardinal has attracted substantial grant funding through the Campaign for Catholic Schools to realize the initiative's recommendations. The most substantial gift--believed to be the largest gift ever made from a foundation to support systematic reform for Catholic elementary education--was $15 million by the Yawkey Foundations.

The Boston Preservation's Alliance has announced it will award their 2012 Preservation Achievement Award for Rehabilitation/Restoration of a Religious Property to Donham and Sweeney Architects for their work restoring St. Cecilia's Church on Belvidere Street in Boston.

During the multi-phased rehabilitation of St. Cecilia's Church, the existing parish house was demolished, but the original foundation was preserved. The lower church saw interior gut renovations, and the rectory and upper church underwent selective renovations. On the site of the former Parish House, a new, two-story glass and steel addition was constructed. Prior to this project, the parish had not undergone any restoration work since 1954.

St. Cecilia's Parish, dedicated in 1894, was built by and for the maids and coachmen who served the upper class of Back Bay at the end of the nineteenth century.