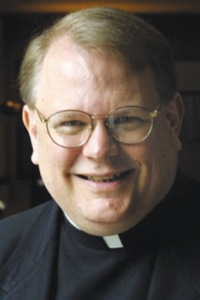 BRIGHTON -- Settling in as rector at St. John's Seminary Msgr. James P. Moroney sees hope and potential on the horizon as he lays in a course to move his new ministry forward.

With almost 30 new seminarians entering in the fall, Msgr. Moroney is about to get a larger influx of new recruits to forward the mission of the Church than any seen at the seminary in 20 years.

"As rector of the seminary I have tried, in the whole five weeks that I have been rector, to do whatever I could to foster the mission of this extraordinary institution," he joked.

While some seminarians come from as far off as Vietnam and Saudi Arabia, many come from dioceses surrounding the Archdiocese of Boston. More local seminarians will come from Massachusetts dioceses in Worcester, Springfield and Fall River, and from out-of-state dioceses in Burlington, Vermont; Portland, Maine; Providence, Rhode Island and Hartford, Connecticut.

Msgr. Moroney had a special message for the men coming to the seminary in the fall.

"You new men are the hope of the Church throughout the world. We await your enthusiasm, your goodwill, your openness to formation, and your love of God's will in your life," he said.

The rector of St. John's Seminary also had a message for the lay people in Boston, as they support the vocations of the men, and for those studying in lay ministry programs alongside the potential future priests.

"I spend a good deal of time speaking to people in all different walks of life in the Church about vocations. There is no role in vocations more important than the individual parishioner who sees a young man who they think God may be calling to the holy priesthood, and through their encouragement, and their prayers, and their witness, can help that man to answer God's call," he said.

"Just as a young bride and groom need to be encouraged by the whole Church to be faithful to the call that God has placed into their hearts, so the young seminarian needs the prayers, the support, and the witness of every one of the baptized in order that he may have the grace or the courage to answer God's call."

The new rector acknowledged the work of his predecessor Bishop Arthur L. Kennedy at the seminary.

On Aug. 6, Msgr. Moroney received exciting news from his bishop in Worcester, Bishop Robert J. McManus. Within the ranks of those granted the papal honor of Monsignor the newly appointed rector has been granted the degree of Prelate of Honor.

"The Prelate of Honor is the second level of monsignors. When the Holy Father appoints somebody a monsignor, which is simply an honor that he grants to priests, there are actually three different levels," he said.

Msgr. Moroney said a priest given the honor becomes first a Chaplain of His Holiness, second a Prelate of Honor, and sometimes advances to become a Protonotary Apostolic.

"No superpowers come with the job. This is simply an honor that the Holy Father bestows in encouragement of all of the many good works that I have been privileged to be able to do for the Church," he said.

The new rector said his efforts have included contributions to the translation of the New Roman Missal and serving as executive secretary of the Vox Clara commission on behalf of the Congregation for Divine Worship and Discipline of the Sacraments.

"Everyone is always appreciative of encouragement in life. But knowing that I enjoy the confidence of my own bishop, Bishop McManus, and of Cardinal O'Malley and most particularly of the Holy Father in this instance is a great consolation. It helps me to be able to garner whatever strength and determination I need to do that which the seminary and which the Church asks of me," Msgr. Moroney said.