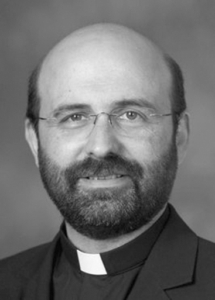 Father Carlos Flor is a busy man. As the newly appointed pastor of three parishes -- St. Thomas Aquinas Parish and Our Lady of Lourdes Parish in Jamaica Plain, and St. Mary of the Angels Parish in Roxbury, he is always on the go.

"Since I arrived two months ago, we have been very busy trying to collaborate together, while still maintaining the separate identities of the individual parishes," he said.

Thinking of becoming a pastor of three parishes was a bit daunting, Father Flor admitted, but "what I have found is many parishioners who have a lot of energy and a very positive attitude," he said.

He began his assignment June 5.

Born in 1966 in Villena, Spain, a small town in the province of Alicante, Father Flor is the oldest of three children. As a young child, Father Flor recalled, the Salesian Fathers at his Catholic school would often ask him if he considered becoming a priest.

"I always said no," he joked. "In my late teens and early 20s, I had a plan to become a cardiologist and have a family."

That all changed for Father Flor in 1991, when he participated in the World Youth Day pilgrimage to Czestochowa, Poland with the Neocatechumenal Way.

"I felt the Lord calling me very strongly and I surrendered and said, 'I trust you,'" he said.

"Thanks to the Neocatechumenal Way, my call became clear."

Father Flor attended the Redemptoris Mater International Missionary Seminary in Newark, N.J.; in 1997 he was ordained by then-Archbishop Theodore McCarrick at Sacred Heart Cathedral in Newark.

For seven years, he served in three different parishes of the Archdiocese of Newark. Then in 2004, Bishop John J. Myers released Father Flor for service to the Archdiocese of Boston at the request of then-Archbishop Seán P. O'Malley.

"The seven years I have spent in Revere were very happy years, full of many challenges and joys," he said. "I have had had many good experiences there."

Looking forward, Father Flor knows there are many challenges ahead, but he is full of gratitude to all the people who have helped make this transition smooth.

"First and foremost, I am very grateful to God and to the cardinal for the trust he has afforded me," he said. "And I am grateful to all the staff and volunteers in the parishes who have been so helpful and so full of energy."

"I am also thankful to all my brother priests who help me, especially on weekends, with all the Masses because without external help, it would be impossible for me to cover all the Masses alone." Father Flor said.