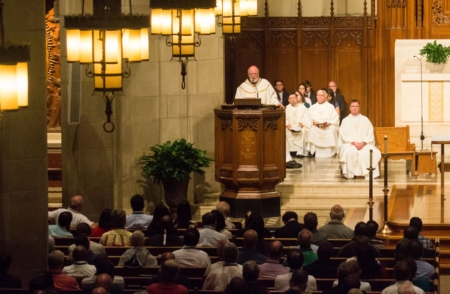 This week, the Jesuits held their International Colloquium on Jesuit Secondary Education in Boston from July 29 to August 2... I celebrated Mass for them on Tuesday (7/31), the Feast of St. Ignatius. Pilot photo/CardinalSeansBlog.org

I was asked to perform the ordination of Father Pablo Osorio, a Capuchin from Colombia who is stationed in Puerto Rico. Ordinations, of course, are always a very important moment in the life of the Church and I was proud to be asked to do it. The ordination was held in the Church of our Lady of Perpetual Help. The pastor there, Msgr. Carlos Cantata, worked with us in Washington at the Bishops Conference as the director of the Latin American Secretariat. He is now pastor in Puerto Rico at that parish. Being in Puerto Rico also afforded me the opportunity to celebrate a Mass for the renewal of vows of Juan and Kim Woodruff, whom I had married over 25 years ago. Kim's parents, Manny and Maura Cassiano, renewed their vows in the same Mass. The renewal of vows took place in the Church of San Francisco, which is one of the churches the Capuchins have in Old San Juan.

This week, the Jesuits held their International Colloquium on Jesuit Secondary Educatiovn in Boston from July 29 to August 2.... We pray that this very important ministry of training young people in the life of discipleship and academic excellence will be blessed, and the ideals of St. Ignatius will inspire all of those involved in this ministry throughout the world.

I encouraged them to take advantage of the Year of Faith to stress the importance of the Sunday Eucharist for students, to help them to learn how to pray and how to be part of the worshiping community. I celebrated Mass for them on Tuesday (7/31), the Feast of St. Ignatius. The Mass was in French, Spanish and English representing the most commonly spoken languages in that group. As I pointed out at the Mass, their efforts affect not just the thousands of students they have, but all the millions of lives those students will touch. There is a ripple effect to a good Catholic education.

As I told them, I never went to Jesuit school myself, but my father was trained by the Jesuits. They instilled in him a love for the Church, his family, the social gospel of the Church and his Catholic faith, which he passed on to us. In that sense, all of us in my family were the beneficiaries of that Jesuit education.

Feast of the Portiuncula

I also want to note this week that yesterday, August 2, was the Feast of the Portiuncula. The Portiuncula, which means "the little portion," was the tiny chapel that, for St. Francis, became the central church of the order. In many ways, its smallness and poverty express a lot about the spirit of St. Francis. ...One very interesting fact related to the Portiuncula is that here in the archdiocese we have a replica of it in Hanover. It was constructed by Cardinal Cushing and, in fact, that is where he is buried.

St. Francis was very instrumental in obtaining a special indulgence for the Feast of the Portiuncula because he said many people would like to go on pilgrimage to the Holy Land but, particularly at that time, most Catholics would never have that opportunity. So, he wanted them to be able to visit the Portiuncula and receive the same plenary indulgence they would receive if they had visited the Holy Land. Pope Honorius III granted his request in the year 1216 and the feast became known as the "Perdono d' Assisi," the Pardon of Assisi. That indulgence was later extended to include a visit to any Franciscan church or chapel, and today the indulgence may be also obtained through a visit to any other parish church or cathedral on that day.

As a child, I would always visit the Poor Clares on the Feast of the Portiuncula with my grandparents. It was a yearly event in our lives to observe the Feast of the Portiuncula. I know many people in our archdiocese will have visited the Poor Clares, or the Arch Street Shrine in Boston on this special feast. If you weren't able to be one of them, I invite you to mark your calendar for next year. It is always a gift to be able to take advantage of this special moment of grace.