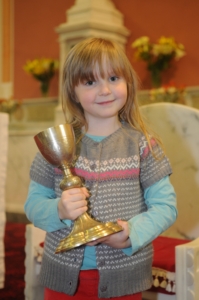 The Chalice in use in Castletown Kenneigh Church, Enniskeane, County Cork, Ireland, was donated by former parishioners living in Boston in 1913. It is being held here by one of the young parishioners from Castletown, Geraldine McCarthy, whose mother Margaret is the sacristan at the church. Pilot photo/courtesy Tom Hayes

CASTLETOWN KENNEIGH, Ireland -- It has been used at Mass everyday for almost 100 years, but its exact origin is lost to history.

Approaching the centennial anniversary of the donation of a chalice to St. Joseph's Church in Enniskeane, County Cork, Ireland by former parishioners living in Boston, the parish's pastor hopes to unravel the mystery of who those donors were.

The only hard clue: an inscription on the bottom of the chalice that reads, "For use in the Castletown Chapel. Presented by a few former parishioners. Boston, April 1913."

Father Tom Hayes, 52, pastor of three churches in the Enniskeane parish -- including St. Joseph's -- said he has an interest in history related to local churches. He said he has often inspected pews, stained glass, and other church objects to find out the names of donors since his ordination in 1985.

The chalice in question is unique because its arrival in the church seems to have bucked local custom.

"Our tradition here is that most of the priests get a chalice when they are ordained a priest, and they carry that chalice with them from church to church, which they use throughout their lives. Normally, they leave the chalice in the church where they die, but the church in Castletown Kenneigh, St. Joseph's Church, only has this one particular chalice," Father Hayes.

The church does not have a chalice left through this tradition, instead when the parishioners celebrate communion they often remember the contribution of the Boston Irish community.

"We are one as a community when we pray, so we are celebrating our connectedness with Christ himself, but we are also acknowledging that we are not just gathering to be connected with Christ, but that it is a very important part of our faith that we are also bound to one another," he said.

He noted the fine craftsmanship of the chalice and suggested that the donors took great care and expense in choosing it.

"At the time, it would not have been an insignificant gift. Whatever people put it together, it was a significant sacrifice for them," the priest said.

The chalice was donated the year after the Titanic sank and within living memory of a famine in the area from 1845-1848.

"Clearly by the inscription that they put on it -- because it refers to a group of former parishioners in Boston in April 1913 -- they are very conscious of the fact that they consider themselves as parishioners of this church and of this community. I just thought it would be nice for us to honor their memory by being able to record more fully who the people were," he said.

He said donations of the items needed to run a parish -- particularly from Irish-Americans-- play a key part of the life of individual churches in his country.

"They are donated by groups and organizations within the parish so that their connection with the parish can be remembered, and that (connection) can be prayed for and that their people won't be forgotten," Father Hayes said.

Archivist for the Archdiocese of Boston Robert Johnson-Lally looked into the case to help the pastor shed some light on the origins of the chalice.

He was not able to find any official records, even when he reviewed correspondences from the third archbishop of Boston William Henry O'Connell, who served from 1907 to 1944.

"It is probably not an official donation from the archdiocese. It is probably just from a group of private individuals," Johnson-Lally said.

He said the unofficial nature of the donation likely resulted in no record being kept of where the chalice came from, but that descendants of the donors might have a chance to uncover the truth regarding the chalice.

"If anybody recognizes the name of the parish in Ireland and knows that their relatives came from there, they might be able to help," he said.

The pastor of St. Joseph's Church in Ireland also had a bit of information that he gathered from parishioners there.

He said a parishioner told him once that a family by the name of Sehily had some role in the donation of the chalice around the turn of the century.

If the pastor can find out the names of the donors, he said he would like to honor them in a liturgical celebration of the chalice being used every day for 100 years in April of 2013.

"It just struck me that it would be very nice for us in our parish here, on our side of the water, to be able to maybe when the centenary of the donating of the chalice happens next April that we could actually mark it liturgically, and in some other way too here in our parish, by prayerfully remembering the people who generously gave the chalice," Father Hayes said.

Father Hayes also said much of the Ireland's churches benefit from such donations from the sons and daughters who left Ireland for the United States over the centuries.

Anyone with information on the origin of the chalice can contact Pilot staff reporter Christopher S. Pineo at 617-779-3784 or CPineo@PilotCatholicNews.com.