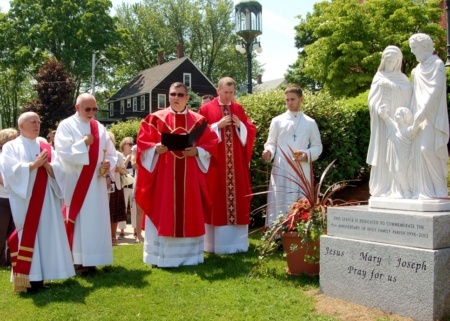 Regis College takes digital leap with iPads for all on campus

WESTON -- Regis College President Antoinette M. Hays, PhD, RN, has announced that Regis is embracing digital technology to become an iPad institution this fall. "I'm very excited that iPads have now arrived on campus; it's not only about the tools, it's about the pedagogical innovation," she said. "Regis is becoming a leader in higher education in the kind of interactive and participatory teaching and learning that our digital world invites. We are building classrooms without walls as part of our global outreach," noted President Hays.

Since early spring, more than a dozen faculty members have been working with iPads to incorporate digital pedagogy into their curriculum design in preparation for the kick-off this autumn. Afterward, all incoming full-time students, and all full-time and half-time faculty members will receive iPads with apps tailored to the Regis learning community, and begin using them in course work, interactive class discussions, and in-class research.

AMESBURY -- The new 4-foot, 725-pound marble statue of the Holy Family, showing Joseph and Mary holding the hands of a young Jesus, was unveiled and dedicated in the front of Holy Family's parish church, May 27th --Pentecost Sunday, the birthday of both the Catholic Church and Holy Family Parish.

After Sunday's 10:30 a.m. Mass, in a brief ceremony to mark the commencement of the parish's 15th Anniversary year, pastor Father Louis Palmieri acknowledged the incredible effort undertaken in the union of St. Joseph's Parish, established in 1866 as a church for European immigrants, and Sacred Heart Parish, established in 1903 to serve predominately French-Canadian Catholics as they inhabited Amesbury and the surrounding towns.

"Like any family, the Parish has its ups and downs," said Father Palmieri. Adding, "However, our Lord's Holy Family has truly blessed the parish so that today we stand proudly as a vibrant faith community, together in Christ -- ever striving to be an affirmative reflection of Jesus, Mary and Joseph."

The two churches, that are down the street from each other, started collaborating in 1992, formally merged in 1998 and became housed as one in 2007 with the sale of the Sacred Heart Building.

The entire cost of the statue was paid for by many individual contributions and was blessed by Cardinal Seán O'Malley during his recent visit to the Parish.

CHELMSFORD -- The family of Clarivel Marin de Dragas came together with volunteers to participate in the 4th of July Parade in Chelmsford.

They created a float for the parade to support religious freedom in protest against a mandate to force Catholic employers to provide employees with sterilization, birth control and abortive pills under the new healthcare law.

"Preserve religious freedom ... our first liberty," said a banner on the float.

A "Liberty Bell" made out of cardboard and a big candle to symbolized the Catholic values.

"This is our little way to create awareness of the importance of religious freedom in our local community," Dragas said.

"Let the children guard what the sires have won," is the town motto of Chelmsford.

Dragas said her family was proud to represent their Catholic heritage in the parade.

The family had originally prepared to simply march with a banner, but they received help from St. John the Evangelist Church in North Chelmsford.

"When we reached out to them, we knew that there was an opportunity for collaboration. We went together as two teams complementing each other with one goal, religious freedom," she said.