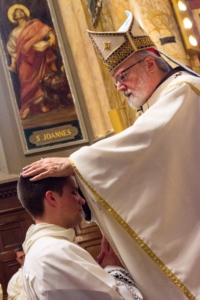 The native of Westford, who earned a bachelor's degree in history and philosophy at the University of Massachusetts Amherst before entering St. John's Seminary and going on to study in Rome, said he was happy to be ordained to the diaconate back home in the Boston Archdiocese.

"It's great to be home. I study in Rome at the North American College, and it is so good to be ordained a deacon of the Archdiocese of Boston," he said.

Ordination as a transitional deacon comes as a seminarian is in the final stages of his theological studies and is the last major step toward ordination to the priesthood, which usually follows within a year. The first of three ranks of ordained ministry in the Church, deacons may baptize, preside at weddings and rites of Christian burial, assist a priest or bishop at Mass, proclaim the Gospel and deliver homilies.

Cardinal O'Malley said in his July 6 blog post that it was decided to hold the ordination in the summer to accommodate the candidate and his family. In Boston, transitional deacons are traditionally ordained at the Cathedral of the Holy Cross each year in January.

"Normally, Tom would have been ordained either with the rest of our deacons in January or with his deacon class in Rome. But, because much of his family would have been unable to make the trip to Rome, we decided to ordain him while he was home during the summer," the cardinal wrote.

According to the staff at St. John's Seminary, it was the first time an ordination was held in the seminary in more than five years.

The newly ordained deacon said he felt moved by the individual attention granted to him in the ordination and the homily of the cardinal.

"I am just so honored to have been ordained by Cardinal O'Malley and to have been supported along the way by so many great friends and family members," he said.

Deacon Macdonald said being ordained by the cardinal gave him great inspiration to advance in his ministries in the diaconate and toward the priesthood.

"I really look forward to serving the Church as a deacon: preaching, baptizing, and caring for the poor and the weak," Deacon Macdonald said.

Deacon Macdonald will serve the parishioners of St. Paul Church in Cambridge for the summer, where the pastor Father Michael Drea welcomes his help and pastoral service.

"It is a great joy to welcome a young man like Deacon Tom Macdonald here to St. Paul's and really to support him in his pastoral formation. The parish is honored to be a part of that: supporting him with our prayers and our presence here. We are happy to continue the tradition of welcoming young men -- seminarians and deacons -- to St. Paul's to be helpful in their formation," Father Drea said.

Deacon Macdonald will return to Rome in the fall to complete his studies. He is scheduled to be ordained with the rest of his seminary class in Boston next May.

"It is a wonderful grace to be ordained a deacon -- to have made the promises of obedience, prayer, and celibacy in preparation for my priestly ministry," he said.