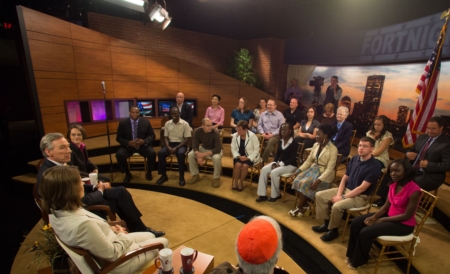 WATERTOWN -- Cardinal Seán P. O'Malley and the Archdiocese of Boston brought the defense of religious freedom to the people of the archdiocese and beyond at a live, interactive "town hall meeting" on CatholicTV on June 25.

Broadcast on CatholicTV Network, 1060AM WQOM, Relevant Radio Network, and CatholicTV.com, the cardinal drove the multi-media discussion with the coordinator for CatholicVoices USA and an attorney focused on religious-liberty issues Kim Daniels, the president of the Catholic University of America John Garvey, and writer and educator on Catholic teachings on family and contraception Angela Franks. Carl A. Anderson, the Supreme Knight and chief executive officer and chairman of the board of the Knights of Columbus, joined the discussion via satellite. The evening was moderated by John Monahan, host of "ClearVoice" on Catholic TV Network

The experts spoke as part of the "Fortnight for Freedom," a campaign promoted by the United States Conference of Catholic Bishops to defend religious freedom. The campaign comes on the heels of the decision by the U.S. Department of Health and Human Services to require most Catholic organizations and employers to provide health plan coverage for contraceptives, sterilization and some abortion-inducing drugs or face stiff fines. The fortnight began on June 21 and ends on July 4.

The cardinal opened the forum with remarks directed to the audience. He later joined a question and answer session with panelists through online participation and studio audience questions.

"We need to speak frankly with each other when our freedoms are threatened. Now is such a time. Religious exemptions and conscience clauses have been under attack. The Archdiocese of Boston's Catholic Charities was forced out of adoption because we could not continue offering the services in a way consonant with our values. USCCB's Migration and Refugees Ministry was recently disqualified as a provider, because it would not agree to refer for contraceptive and abortion services to victims of human trafficking," the cardinal said.

He said the HHS mandate creates a similar threat, and impinges on the Church's freedom to continue the ministry to people outside of the Catholic community through schools, hospitals and charitable services.

"We are Catholics and we are Americans. We are proud to be both. We should not have to choose one over the other. Our allegiances are distinct and complimentary. Defending religious liberty is not a Catholic issue. It is not a Jewish issue. It is not an Orthodox, Mormon, or Muslim issue. It is an American issue," he said as he thanked those of other faiths for supporting the Catholic Church in this struggle.

Daniels, whose practice focuses on religious-liberty issues, particularly rights of conscience in health care over the years, spoke about the need to preserve conscience protection for the religious believers.

"American Catholics are standing up for an American principle. For months our Church has led opposition to this administration's mandate that employers provide insurance coverage for contraceptives, abortion-causing drugs and sterilizations, even when such coverage violates deeply held religious beliefs. From the outset Catholics have resisted the administration's narrow exemption of only certain religious ministries from this mandate. To us the government cannot simply decree that most of our religious institutions are not religious enough to qualify for an exemption," she said.

In his remarks, Anderson addressed the historical implications and context of protecting religious freedom in the United States.

"The founders who wrote the First Amendment saw that our first liberty they sought to protect in the first amendment was our freedom of religion and to protect us against the establishment of religion, against government intrusion into the freedom that we have in conscience as individuals and the freedom we have in community as a church," Anderson said.

Garvey, an expert in constitutional law, religious liberty, and the First Amendment, was prepared to address the issue; before his time as president at Catholic University, he served as assistant to the solicitor general in the U.S. Department of Justice from 1981 to 1984.

He said that "the legal protection of religious liberty is something that is waning. It is given less scope these days. It protects priests but not teachers, religious orders but not hospitals. Catholic schools and hospitals and social service organizations provide the public with valuable services and the government appreciates this but it is blind to their religious dimension," he said.

He also talked about the role of the university in shaping the young people there morally, while not violating the university's own moral underpinnings in the Catholic faith.

"Compliance with the government's mandated services regulations would make us hypocrites, and significantly undermine our mission to teach and inform our students. If we fail to comply we will have to pay a fine of $2,000 per full-time employee or roughly $2.6 million per year," he said.

He said solving the problem of the exemption politically would have been preferable to taking the issue to the court system. But the senate narrowly rejected an amendment "that would have solved the problem," referring to a 51-48 March vote. The Catholic University of America joined with 42 other Catholic institutions in a May lawsuit to block the mandate.

In his third point, he put the importance of religion and God in individual lives into historical and contemporary contexts.

"The framers of our constitution and the Bill of Rights protected the free exercise of religion because they thought it was important for human flourishing and happiness, but our society will not care about protecting religious freedom for long if it doesn't care about God. That is where we must begin to reform. We won't have and we probably won't need religious exemptions for nurses, doctors, teachers, social workers, if no one is practicing their religion. The best way to protect religious freedom might be to remind people that they should love God," Garvey said.

Franks currently serves as the Director of Theology Programs for the Theological Institute for the New Evangelization (TINE) at Saint John's Seminary, and writes and teaches regarding reproductive issues and women's lives in the Church.

Franks immediately laid into misconceptions she observed regarding the nature of the conflict with the HHS mandate.

"All are false, blatantly false. Clearly this issue cannot be about access to contraception, which is inexpensive and broadly available. If a person can afford a cell phone or even three lattes a month, she can quite likely afford to pay for contraception. Instead this issue is about forcing Church organizations and every Catholic to provide contraception and abortion-causing drugs and subsidize them, which are actions against public teaching," she said.

The question and answer session began just before the second half of the show.

In response to a question posed in studio by Andy LaVallee, Garvey said the HHS mandate violates a statute passed by the Clinton administration to bolster religious freedom protections under the first amendment.

He said the statute says "when the government wants to interfere with people's religious liberty it has to have a really compelling reason for doing so, and there has to be no other way that it can accomplish what its objective is."

"This Religious Freedom Restoration Act is one of the counts in the lawsuits that have been filed against HHS," he said.

"Absolutely… I think that our opposition to the mandate stems from our desire to preserve religious liberty and our desire not to be forced to perform actions, to pay for actions that violate our most deeply held beliefs. The Catholic Church is not imposing its beliefs on anyone here. Contraception and the other services covered by the mandate remain widely accessible, almost ubiquitous, in our society. Anyone is still free to get those services, but what they are not free to do is to force Catholic institutions to provide those services and goods for them. That is why we have the First Amendment and the Religious Freedom Restoration Act, to protect against being forced to do things that violate our most deeply held beliefs," Daniels responded.

[Editor's note: The program can be viewed in its entirety on-line at www.CatholicTV.com.]