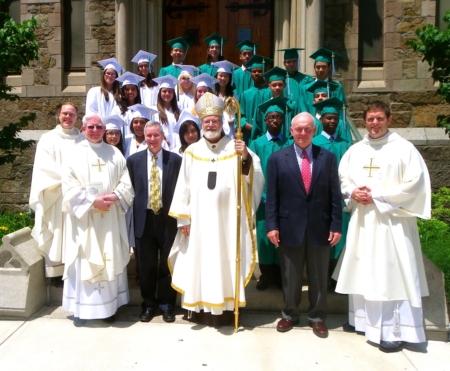 '...On Friday, June 8, I celebrated the baccalaureate Mass with the eighth-graders at St. Columbkille Partnership School in Brighton. The growth at St. Columbkille is also a great sign of hope for the future of Catholic education in the archdiocese.' Pilot photo/CardinalSeanBlog.org

Bishops' meeting and Fortnight for Freedom

Much of the rest of my week was spent attending the gathering of the U.S. Conference of Catholic Bishops, which was held in Atlanta. On Wednesday we gathered for Mass at the Sacred Heart of Jesus Basilica. It is a very beautiful and historic church.

In our meetings and discussions there was a great emphasis on the issue of religious freedom. Archbishop William Lori, who is chairman of the Ad Hoc Committee for Religious Liberty, gave a presentation and there were also talks by Catholic University President John Garvey and Professor Tom Farr, the director of the Religious Freedom Project at Georgetown University. President Garvey spoke about the legal situation in our country, and then it was thought helpful to look at the issue of religious freedom worldwide. Historically, the United States has taken a stand in favor of religious freedom in the world, but according to Professor Farr, recent administrations have not been aggressive in promoting it.

For us, as Catholics, this is an issue of great concern. According to the Pontifical Mission Societies, 26 Church workers were murdered throughout the world in 2011, and more than 1,000 have given their lives over the last 30 years. We also know that, in many countries, Christians are being driven out en masse. A good example of this is Iraq, where before the war there were 1.5 million Christians and now over half have been driven out of their own country. Bishop Shlemon Warduni, a Chaldean auxiliary bishop of Baghdad, gave a very moving talk, urging the peoples of the world to speak out on behalf of Christians in countries such as his.

Of course, this just serves to underscore the importance of the upcoming Fortnight for Freedom, during which dioceses throughout the country will dedicate two weeks, from June 21 to July 4, to educational efforts and invitations to reflect on religious freedom in our country.

Realizing this is an election year, the bishops conference is asking that every effort be made to prevent this from becoming a partisan or political exercise. However, the topic has, in many ways, been thrust upon us by the Department of Health and Human Services' issuance of a mandate that will require Catholic employers to provide health plan coverage for morally objectionable procedures and drugs. The mandate, of course, could be resolved in a variety of ways, including pending court cases or even by the administration itself. But beyond the immediate issue -- which of course is very urgent for us because it sets a terrible precedent that continues to diminish religious freedom -- it is very important for the Catholic community to reflect on how conscience rights and religious exemptions are being eroded in so many areas. We must remember that our country was founded, in great part, on the principle of religious freedom and was a haven for people fleeing religious persecution in Europe. This freedom was so fundamental that we enshrined it in our Constitution, not as a right given to us by the government, but as the right of every human being and something our country was committed to defending. At this time, we need to hold this up, reflect upon it and call our people to a greater awareness of how precious our religious freedom is. When we see how, in other parts of the world, peoples' religious freedom is trampled in such a terrible way, it should make us very proud of our own heritage but also make us ever more vigilant in protecting this tradition.