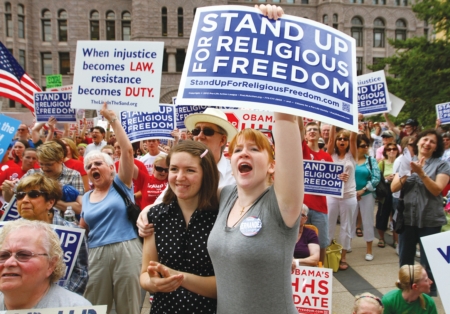 Catholics Caitlin Heaney, right (holding blue sign), and her sister, Elizabeth, show their support during a rally for religious freedom in downtown Minneapolis June 8. The U.S. bishops have called for "a fortnight for freedom" from June 21 to July 4 for prayer, study and public action emphasizing the Christian and American heritage of liberty. In Boston, Cardinal Seán P. O'Malley will lead a live town hall meeting on CatholicTV on June 25 at 8:00 p.m. CNS photo/Dave Hrbacek, The Catholic Spirit

WATERTOWN -- The U.S. Bishops have called for "Fortnight for Freedom," a 14-day period of prayer, education and action in support of religious freedom, from June 21 to July 4.

The 14 days from June 21 -- the vigil of the Feasts of St. John Fisher and St. Thomas More -- to July 4, Independence Day, are dedicated to this "Fortnight for Freedom." This special period of prayer, study, catechesis and public action emphasizes Christian and American heritage of liberty.

The CatholicTV Network will participate in the Fortnight for Freedom with special programming from June 21 to July 4, to rally support for the protection of religious freedom in the United States.

Throughout the two week period called for by the U.S. Conference of Catholic Bishops, Father Robert Reed, president of CatholicTV will offer a daily reflection on the theme of religious freedom in a series of Blinks. In support of this call to action the CatholicTV Network has arranged a special hour-long discussion with Cardinal Seán P. O'Malley and a group of young Catholics in a live forum on the evening of Monday, June 25, 2012 from 8-9 p.m. The event will include a discussion panel, and will be moderated by ClearVoice's John Monahan.

"This summer, the bishops of the United States have recommended that we focus 'all the energies the Catholic community can muster' to heightening people's awareness of our most cherished liberty: Religious Freedom. When our freedoms are threatened, we need to speak frankly and with courage and now is such a time," said President of the CatholicTV Network Father Robert Reed.

"As American citizens, we need to be on guard, for religious liberty is under attack. Join us here on The CatholicTV Network between June 21 and the 4th of July as we celebrate Religious Liberty and pray urgently for a new birth of freedom in our beloved country."

Coverage will be available on CatholicTV and CatholicTV.com. Comments and questions will be addressed live during the event on CatholicTV's Facebook page. Viewers can also join the conversation by tweeting @CatholicTV. The event will also be simulcast on WQOM 1060AM in Boston and Relevant Radio across the country.

Learn more about Fortnight for Freedom at: www.Fortnight4Freedom.org.