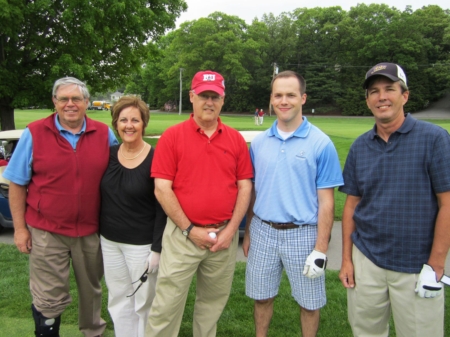 The 20th Annual Blessed John XXIII National Seminary Golf Tournament was held on May 21 at the Weston Golf Club. Due to the generosity of the participants and sponsors this was the most successful tournament to date -- raising over $100,000.

A full roster of golfers participated in the day's events which included lunch at Weston Golf Club, 18 holes of golf, a social hour, silent auction, raffle and dinner with tournament and door prizes. The tournament was supported by over 80 businesses and sponsors -- both local and national.

This year the tournament was held in memory of the founders, Steve Rowen and his widow, Fran Rowen. Tournament proceeds benefit the educational program for more than 60 seminarians currently enrolled at Blessed John XXIII National Seminary, which has been a Weston institution since 1964. This national seminary prepares mature men who have already contributed to their community through a secular career and, upon graduating, will embark on a new vocation as ordained priests.

"Our unique formation program helps address the increasing need for parish priests to serve the faithful of the Church," said seminary rector Father William B. Palardy.